The comic book adaptation that languished in development hell for years returns for its second season. AMC’s choice to run the first and second episodes on back-to-back evenings delivers a one-two punch to easily offended television viewers and any naysayers who thought the irreverent, supernatural modern western couldn’t find its footing this time around. While I had my own concerns going into the pilot, the inaugural season wove a compelling (if occasionally sluggish) narrative that stayed true to the spirit of the source material if not the letter. And now that the series has established its core, it can take off running with the main plot of the comic: the (literal) search for God. The contrast between these seasons can best be seen in their trailers. Season 1 was heralded by a sepia-tinged, ominous trailer while season 2 cranks up the color, the jokes, and The Go-Go’s soundtrack.

The opening scene of episode one reunites us with our trinity: Jesse Custer (small town preacher imbued with the power to make people do whatever he says), Tulip O’Hare (Jesse’s ex from his criminal past with a knack for fast driving and kicking ass), and Cassidy (a hard-partying Irish vampire who has a one sided affection for 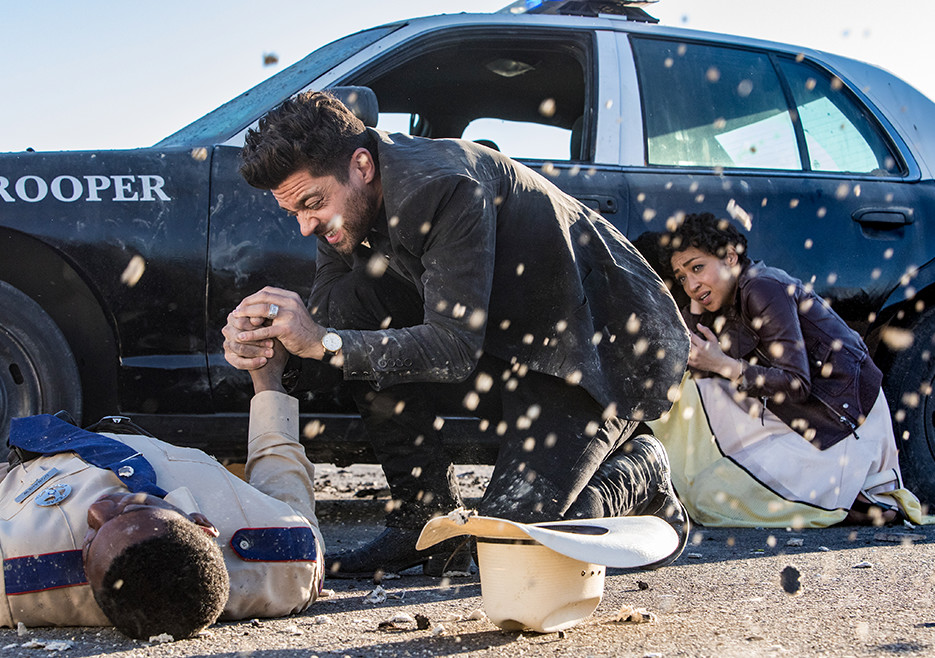 Tulip following a one night stand that Jesse knows nothing about). A conversation about circumcision disposal turns into a less-than-realistic car chase set to “Come On Eileen”. Soon after the trio is apprehended by the cops and Jesse has to bust out the Word. But it’s out of the frying pan and into the fire as an indestructible cowboy arrives on the scene and massacres all the lawmen, with our cast narrowly escaping – all this in the first ten minutes of the season.

I watched the premiere with a friend who was aware of the comic but hadn’t seen the first season and he found it very coherent. Given that the setting of the first season (along with most of the cast) were literally blown up it wouldn’t be hard to skip the earlier episodes entirely. Clever writing (kudos to Sam Catlin) sets up the character dynamics and the stakes without repetitive exposition while Seth and Evan provide the snappy direction that switches tone on a dime to make this manic adventure work.

But all the craft in the world would be for naught if the cast wasn’t filling the shoes of their larger than life characters. Dominic Cooper’s Jesse is a bit more of an asshole than he was in the source material but 1) it makes sense for someone given God-like power and 2) it will give him more of an arc. Joseph Gilgun’s Cassidy readily conveys the bloodsucker’s darkness beneath his fun-party-guy facade. His burning passion for Tulip is made more complicated in this adaptation (making him less of an asshole), which will only lead to messier feelings when/if they come to a head. And we can’t forget Ruth Negga who, if she didn’t silence quasi-racist fanboys about being “wrong” for Tulip with her Season 1 performance, she surely shut them down with her Oscar nomination for “Loving”. Thankfully 1) she didn’t leave between seasons and 2) she is given so much more to do. Last season was downright slow at points and (unfortunately) Tulip would slip into the background while other plot lines were unfolding (or while long takes with dead air played out). But if these two episodes are anything to go on, our cast (principal AND supporting) will be trading hilarious/profane lines as the story zooms forward. 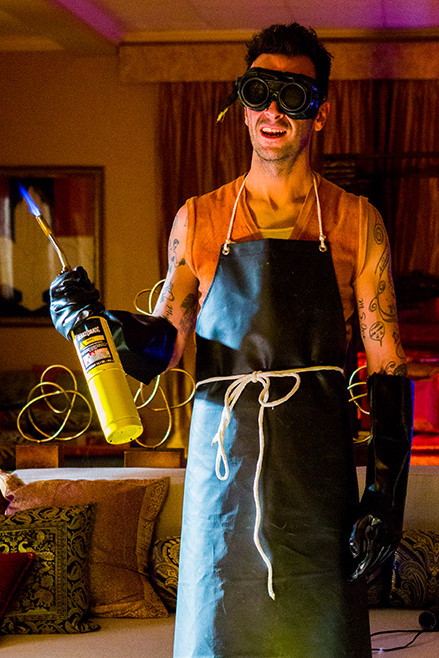 While Season 1 took its sweet time delivering the Saint of Killers and getting our crew out of Annville, Season 2 is already moving from Vegas to New Orleans (a notable locale from the comics). The teaser (which I thought had more juicy scenes than the trailer) shows Arseface in Hell talking to Hitler and gives a better look at Herr Starr (a key villain) and The Grail. And when the normally cool Jesse is asked about his mother’s side of the family, his tense reaction (combined with the fish tank treasure chest behind him and the sound design) are a wink to comic fans waiting for Jody, T.C., and Grandma to show up. With 13 episodes in the season order this time around as opposed to 10, I wonder how many more references they will pack in.

As the comic was very much its own animal, it’s encouraging to see the show follow suit. As previously mentioned, the first season setting was obliterated by a methane explosion. The Saint of Killers murders cops, old men, dogs, and women. Fiore (an angel banished to Earth) appears in 1) a suicide montage and 2) a drug montage (with the help of Cassidy, naturally). The show has established that God is missing and what better way to reinforce that than by making death meaningless. When an entire town is wiped out by cow farts, life is cheap – dirt cheap. But rather than agonizing over this existential dilemma, the show plays it up for laughs. It is that total irreverence that makes both the comic and its adaptation stand out in their respective mediums. The supernatural universe, the genre shifts, and “optimistic” nihilism of the show makes it more akin to “Rick & Morty” than it does to anything on AMC’s slate (or most anything else considered “prestige” television). Kevin Smith once said the series was “More fun than going to the movies!” – who knew he would be right about the television show as well?

Review 6 (out of 7) – Season 2 comes out guns blazing with laughs and violence, both intense and disturbing. The comic that was considered “unfilmable” is now the show that can’t be ignored.