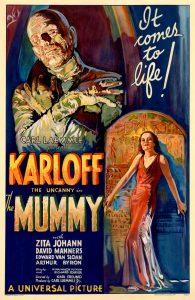 1932’s The Mummy is a difficult film for me to revisit, as it was the first I distinctly remember being (very) disappointed by. As a child, I was obsessed with movie monsters as well as ancient Egyptian culture, and after seeing pictures of Boris Karloff’s fantastic makeup in The Mummy, I was incredibly excited by the concept of a movie about a vengeful mummy lurking about in the shadows, killing one person after another. The film I saw was sadly not at all what I had envisioned.

While it disappointed me as a child, I can now appreciate The Mummy for the fairly unique slow-burn drama with a hint of horror that it is. The story will not appeal to those looking for spectacle, but it’s surprisingly emotional and romanticizes the antagonist in a way that more recent adaptations of Dracula do with its lovelorn vampire. After digging up the mummified corpse of an ancient Egyptian priest named Imhotep, an archaeologist unwittingly recites a forbidden spell which brings the mummy back to life. Years later, the mummy, now posing as a well-to-do and surprisingly normal-looking Egyptian noble, finds a modern woman named Helen, who he believes to be the reincarnation of his dead lover. Imhotep vows to restore Helen’s former self’s memories and make her immortal beside him, killing anyone who gets in his way. 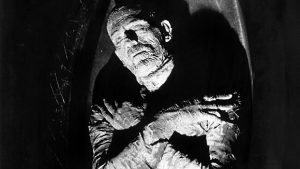 The film is strongest when it focuses on Imhotep’s misguided emotions, which make him surprisingly relatable in a unique way as a movie monster. The story posits that Helen truly is the reincarnation of Imhotep’s lost love, and there is a clear conflict within the female lead, who comes to accept that an ancient spirit resides within her body – a spirit that yearns to be reunited with Imhotep. The most compelling conflict in the movie is between Helen and the priestess who resides within her body, with Imhotep’s master plan of ritualistically killing Helen so that she can be reborn as an eternal mummy feeling downright goofy in comparison.

While the emotional drama is strong, it doesn’t give way to much excitement in terms of action, which follows a rather dull pattern: Imhotep recites a spell, and either someone standing in his way suddenly drops dead in a remote location, or a mesmerized Helen becomes overcome by Imhotep’s spell and makes her way toward his location. Sometimes Imhotep’s recitation is accompanied by a creepy, if overused, direct shot of Karloff gazing intensely. There is a rather lengthy flashback sequence depicting Imhotep’s tragic downfall in ancient Egypt that is relatively action-packed, but the majority of the film focuses on creating a solemn atmosphere, and the strong cinematography helps to accomplish that quite effectively. 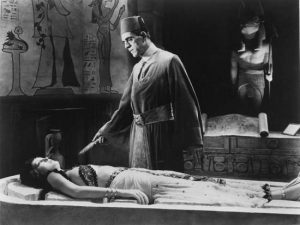 The Mummy is a spiritual man’s monster movie, and one that hardly features a monster at all. I’m not kidding when I say that the famous image of Karloff in his mummy makeup is from the first 10 minutes of the movie, while he spends most of the film as a fez-adorned man with distracting, fake wrinkles. It’s a shame that to this day, Universal markets the film as if it’s about a killer mummy shambling about the modern era, but I’ll admit that the literal mummy looks pretty damn cool in what little of the film he is in. For what it is, The Mummy, like The Phantom of the Opera, is a compellingly twisted horror-romance that forces us to examine, and even sympathize with, the humanity in its titular monster.

Despite its shortcomings, I would recommend The Mummy even if it is the most forgettable of the early Universal monster movies. It’s a moody and well-shot film, and Karloff’s performance is fun even if it is disappointing to see him out of his full mummy makeup for so much of the film’s running time. Go into this one with tempered expectations and you’ll find a story with a surprising amount of heart, if little viscera otherwise.

Fun Fact: Unlike its monster contemporaries, The Mummy never received a direct sequel, instead being remade a decade later.

Memorable Moment: Enjoy those brief shots of the living mummy while you can, because that’s all you’re gonna get!