Having written about at least one movie featuring each of the most famous Universal monsters, Ghastly Gems has hit something of a crossroads. Before moving onto sequels, spin-offs, and other monster-related oddities, let’s start the spookiest month of the year off by ranking Universal’s pantheon of cinematic monsters to see who is the ghastliest of them all!

7. The Mummy, AKA Imhotep (featured in 1932’s The Mummy) – Imhotep – a lovesick priest from ancient Egypt who was mummified and buried alive – doesn’t get any sympathy points to help him out on this list. Nor does he get points for being impressively portrayed by the great Boris Karloff. This film is called The Mummy and every damn bit of media surrounding it showcases Karloff’s fantastic mummy makeup, and yet that makeup is mostly seen at the very beginning of the movie! No amount of creepy Karloff’s staring is gonna keep Imhotep from the bottom of this list. 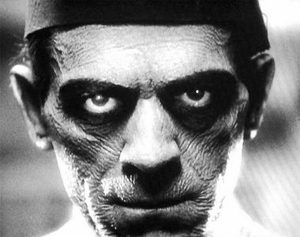 6. The Phantom (featured in 1925’s The Phantom of the Opera) – Lon Chaney’s Phantom is the stuff of nightmares, and the reveal of his ghastly visage is one of horror cinema’s greatest moments. This adaptation of the French novel portrays the Phantom as a sadistic monster who lures his adversaries into the labyrinthine tunnels beneath the opera house he haunts. Between his devious trap rooms and making the heroine choose between others’ lives and her own happiness, the Phantom can be thought of as the original (and much creepier) Jigsaw. 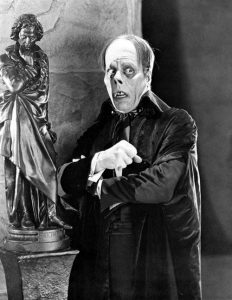 5. The “Gill Man” (featured in 1954’s The Creature from the Black Lagoon) – Perhaps the most divisive of the “Universal Monsters,” poor Gilly just doesn’t get enough credit – probably because he’s the only one that is 100% non-human. And yet, the Gill Man exhibits more humanity than several of the other monsters on this list. The humanoid fish creature mostly attacks a group of researchers out of self-preservation, and as Marilyn Monroe’s character pointed out in The Seven Year Itch, perhaps he just wanted to be loved! 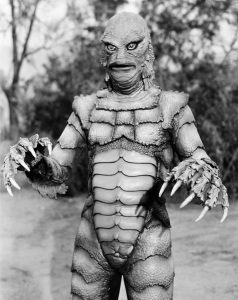 4. The Invisible Man (featured in 1933’s The Invisible Man) – Jack Griffin – a brilliant doctor who uses an experimental chemical on himself to become invisible – is at once the most human and most monstrous of the characters on this list. Aside from his invisibility, which has nothing to do with genetics, he is entirely human, and yet he racks up the largest number of kills by far of any of the Universal monsters’ debuts. Claude Rains does an excellent job of providing a voice for the lunatic doctor, and Griffin’s rapid descent into homicidal psychopathy is a blast to watch. Also worth noting is that his creepy bandaged appearance makes it so that The Invisible Man has something resembling an actual mummy in it longer than The Mummy does! 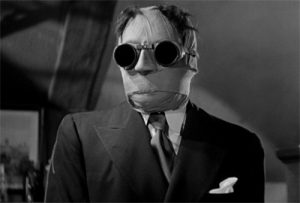 3. The Wolf Man (featured in 1941’s The Wolf Man) – The Wolf Man doesn’t have a very original premise, with previous Universal films such as Dr Jekyll and Mr. Hyde and Werewolf of London exploring similar stories about men turning into literal monsters on occasion. The Wolf Man, however, knocks it out of the park in terms of atmosphere, giving us a well-realized lycanthrope who prowls the foggy woods of Wales. Unlike many other horror antagonists, Larry Talbot, the unfortunate victim of the werewolf’s curse, didn’t do anything at all to warrant his tragic circumstances. 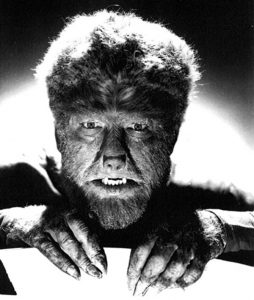 2. Count Dracula (featured in 1931’s Dracula) – Dracula is a character who is the polar opposite of Larry Talbot in the sense that he deserves no sympathy whatsoever. Drac is pure evil, and relishes in his ability to manipulate humans in order to satiate his hedonistic desires. The most famous bloodsucker’s most well-known cinematic vehicle might end up running on fumes by the end, but Bela Lugosi’s magnetic performance makes his Dracula a villain you can enjoy rooting for. 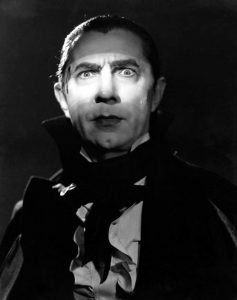 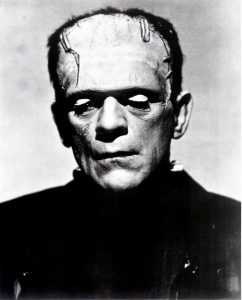 And there you have it! Maybe if Ghastly Gems goes on long enough, there can be a sequel list featuring, uh… Son of Dracula, and that… other vengeful mummy.

Don’t hold your breath on that one.