In a completely out of left-field announcement, Nintendo has extended its partnership with Dark Horse to bring their newest fighting game series, Arms, to comics. Well we are lite on details, we do know that the first collection will drop in the Fall of 2018.

Still unknown is the writers, the artists and the content of the book. A lot is unknown.

Though this is noteworthy as it will be Nintendo’s first Western comic series since the days of Nintendo Power in the early 90s. 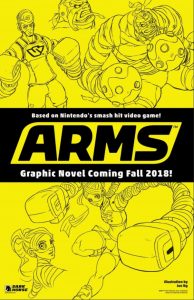 Earlier this year, Nintendo released ARMS™, a fighting game exclusive to Nintendo Switch™. Today, ahead of New York Comic Con and The Nintendo World Championships 2017, Dark Horse is excited to announce a new publishing program for the energetic and strategic fighting game.

The latest installment in Dark Horse and Nintendo’s partnership, ARMS is preceded by The Legend of Zelda™: Hyrule Historia, The Legend of Zelda™: Art & Artifacts, The Art of Fire Emblem Awakening, and The Art of Splatoon™.
ARMS™ is a revolutionary fighting experience for all ages and skill levels. Utilizing Joy-Con™ motion controls, players can throw punches and guide them midflight to hit agile fighters, avoid incoming attacks with dashes, or trampoline high into the air to rain down fists from above. Players can select from a colorful cast of fighting champions and try to win the coveted championship belt in the ARMS Grand Prix.
Dark Horse will publish the first of the ARMS graphic novels in Fall 2018.