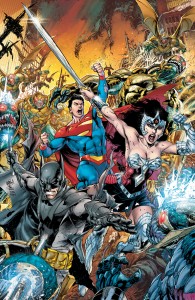 Back in September, DC Comics launched a wave of new number one issues. This would be called ‘The New 52’ and would give old and new audiences an easy access point to the vast catalogue of DC Comics. Unfortunately, some of those titles struggled to find their audience, and were cancelled after five or six. But, this month see’s the launch of The New 52: Wave 2. New number ones to replace the cancelled books and given an opportunity for new books and characters to reach audiences.

One of those titles is Earth 2, and focuses on the ‘Earth 2’ concept of the multi-verse in which the DC Universe is placed. It’s not as confusing as it may sound. These are characters you’re familiar with, Superman & Batman, they’re just different takes on those characters.

Earth 2’s premise is to be a new and rebooted JSA title. The JSA are a known team to fans, and have been a part of DC history since the 40’s. Throughout the years, they developed into a legacy team. Familiar super hero names but different secret identities in those roles. But with Earth 2, you don’t really need to know any of that because they’re starting a fresh from the beginning. 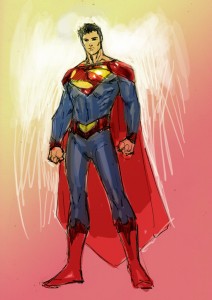 It’s a world similar to the main DC Universe. Super heroes have been around, but not for long. The story opens very similarly to Justice League #1, with Batman, Wonder Woman and Superman taking on the armies of Apokolips. But these aren’t the characters that appear in Justice League. For starters, their costumes are different, and they’re actually better than the main universe costumes. Instead of just adding a few lines over the well known designs, these Earth 2 re-designs are a little more drastic. Superman’s crest is larger and looks to be more a part of his cape. Batman’s crest is also larger, with more black on his chest. I can live with the Jim Lee ‘New 52’ re-designs in all the main books, but I just think if you’re going to change something then why not go all out? Batman, Wonder Woman and Superman still have their iconic looks fans know them for.

Going back to the point I made about this being a legacy title. Earth 2 seems like it’ll still be in that vain, but unlike the JSA were most members were sons and daughters of older members, it seems like the heroes want to live up to the legacies of Batman, Wonder Woman and Superman. I wont go into details, but the three don’t make it out of the battle alive, but they left a legacy. It looks like the Earth 2 title will focus mainly on Alan Scott and Jay Garrick (the original Golden Age Green Lantern and Flash respectively), but we don’t see them become heroes in this issue, which is a bit of a shame. 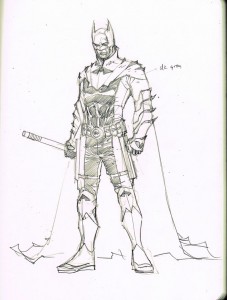 I can see fans wondering why they should check out Earth 2 when they’re still getting used to a new universe as it is. But I think its fun to see how these characters are different from their main universe alter egos. For example, Wonder Woman refers to herself as “The Last Amazon”, making her this more tragic and relatable figure, and giving her something in common with Superman. Whereas Batman’s kid has become his Robin, much like Damien Wayne, but this time he has a daughter.

This comic seems to be a New 52 book more aimed at older, long time readers than some of the new people who jumped on in September. But since it’s a complete reboot of the JSA concept, it’s a good place for new fans to start.

This comic could enrich your experience and enjoyment of the DC Universe more, especially since the Multi-verse is becoming more and more of a thing in this New 52. But it could also be something you don’t care about it all. The art’s quite nice, though.