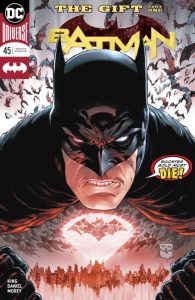 I’ll be honest here, I dropped Batman from pull-list not long after the first Rebirth arc wrapped up. While I’ve heard incredible things about Tom King, I have mostly regarded his Batman run with little enthusiasm. My curiosity has been piqued a few times, namely concerning Batman’s engagement to Catwoman. But other than that, I have not read Batman.

I’m more of a Superman guy. And coming off of reading Action Comics Booster Shot, a recent time traveling arc featuring Booster Gold, I was surprised to see Booster Gold being solicited for the Batman series as well. DC Comics seems to be testing the character’s popularity and I was happy to play along. I was mostly curious to see how King would approach the character, especially because of how closely he had appeared last. I took a peek at the title while collecting my pull and figured I would give it a try. At the least, I would enjoy the wonderful artwork of Tony Daniels. Certainly worth the price of admission.

As I’ve collected my thoughts on this, it’s worth emphasizing again. I am not a regular reader of this title. As such, I was more than a little confused by the start of the issue. There is something very off about Gotham. Hal Jordan is the earlier indicator of this, as he is seen taking his own life. Of course, as comic readers, we have become all too familiar with this type of opener. It’s an element employed far too often by writers looking to add shock value to a book to draw media coverage. The opening scene with Green Lantern was a clear sign that this book is simply out of canon. And as Booster Gold is the featured character of the book, surely this is some sort of alternate timeline. Or at least a timeline that can be avoided. But to that same extent, just how much of this book should I consider purely shock value? 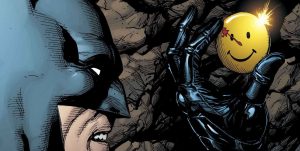 After all, Doomsday Clock is reportedly set two years forward in the DC Comics timeline and the series has shown Batman to be a hotly protested figure in Gotham. That would certainly match the shade of this off-color Gotham. So how many of these oddities should I dismiss before considering if this was a distorted mirror of King’s run so far?

I note this personal experience because of the considerable effect it had on me by the end of the book. The big reveal came as Bruce Wayne was found not to be the Batman of this timeline, but instead a Gotham aristocrat. Booster Gold pulls Bruce aside and fills him in just what exactly is going on here. Booster Gold had indeed crossed timelines. Shocker, right? And reveals that this whole timeline is actually a wedding present for Bruce Wayne. But what should Booster Gold give to Bruce Wayne, the man who has everything? 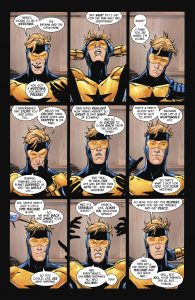 The reveal here is nothing short of perfect. Booster Gold is attempting to recreate a seminal moment in comics history. The gift of discovering what the world would be like if only your deepest wish come true. For Superman, it was a world where Krypton never exploded. For Bruce Wayne? A world where Booster Gold prevented his parents from being murdered.

Throughout the entire issue, I was attempting to connect dotted lines that didn’t even exist. Sometimes, dropping in on a title can be like that. But it made the payoff at the end all the greater. Who even cares that this timeline altering version of Booster Gold completely contradicts his recent appearance in Action Comics? It may have been the only reason I was even interested, but by the end, I don’t even care. I just can’t wait for Batman #46.

Review 7 (Out of 7) – Superbly written with beautiful interior work, Booster is the perfect character to have attempted such a hair-brained scheme. Wonderful read from start to finish.