Paper Monsters: Recut is a great-looking game. From the moment you enter the first world to the breath of the final boss, you’ll appreciate the art direction that developer Mobot Studios has brought to the table. It’s certainly the most noticeable aspect that you’ll see in screenshots and trailers, and it almost looks like a primary selling point for the game itself. The question is, does the gameplay complement the visuals in a compelling way? Yes, potentially…depending on what you’re looking for. 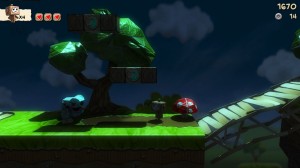 Paper Monsters is a side-scrolling platform exploration game that pays homage to Super Mario Bros. (warp pipes, enemies to jump on) and LittleBigPlanet (toybox visual style). The game consists of six differently themed worlds with 4-5 levels each, including a boss. Each level invites exploration by hiding four items. A golden button in each level will add to your collection that unlocks mini-games, while the three paperclips will unlock your desire to have a 100% completed file. To add a little variety to your adventure, you’ll occasionally encounter some unique levels that include a snow sled, a submarine, a jet pack, and more. 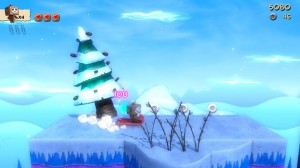 The game simply feels good to play. Controls are tight and responsive, and your protagonist will respond to mid-air changes of direction instantaneously. This lends itself to easy platforming, which is made easier (and more comfortable) with the inclusion of a double-jump mechanic. The levels are fairly easy to navigate, and provide little challenge in the way as you progress to the end of a given stage. The enemies are easily dealt with (most are killed with a simple jump on the head), and the aforementioned hidden collectibles are rarely too far off the beaten path. Bosses may take a heart or two off your health, but are also defeated without too much effort. The levels themselves never break new ground in terms of design, but they are all entertaining enough to play through, especially if you’re looking for all of the hidden items as well. When the levels do begin to feel monotonous, you reach the end of the world and enter a new one, where you’ll have a new visual theme to appreciate.

The game makes use of the general themes you might come to expect — grass, snow, woods, and space, while including some unique worlds like a western area and a candy land. To their immense credit, Mobot Studios makes each of these environments look fantastic, and one of the incentives in progressing in the game is simply seeing what the next world looks like. The colors pop on the screen, and the use of paper and cardboard textures in the visual design is charming and inviting. The game, with the exception of a few visually busy levels, runs at a solid, fluid frame rate. In the end, the visual style is the most noteworthy aspect of the game 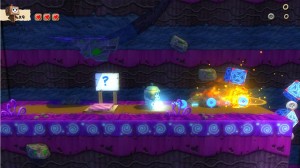 The game will last you 3-4 hours, depending on whether or not you search for and play through the hidden levels and collect all of the hidden items. The mini-games will provide for a few playthroughs of amusement as you chase some high scores as well. Ultimately, there isn’t too much to return to after you complete the game, barring an intent to simply play through it again. However, the set of collectibles in each level helps it to feel like a complete package.

Paper Monsters: Recut functions very well. The levels are amusing to play through, but they won’t resonate with people who are used to stellar platforming titles like Rayman Legends, ‘Splosion Man, Donkey Kong Country: Tropical Freeze, and Kirby’s Epic Yarn. Of course, you’re paying a fraction of the price here, but it’s important to know that the amount of enjoyment you’ll derive from it will take a hit as well.

Review: 4 out of 7
The game is an entry-level platformer that will appeal more to younger children with its simple design and, with the exception of some challenging final levels, easy difficulty. I would quickly and wholeheartedly recommend this game to a family who wants to introduce their children to a charming, accessible platformer. For others looking for something a little deeper and more challenging, you may want to continue searching.

24 year old Texan who is grudgingly buying every good looking handheld that Nintendo throws out there. I usually smell pretty good. Follow me on Twitter @anthonygerhart.