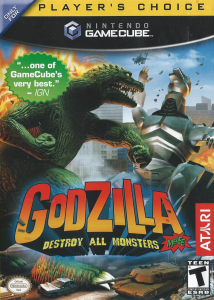 Last week, we took a look at Godzilla’s 8-bit adventures, which ended with the tragically misguided Godzilla 2: War of the Monsters. While things didn’t immediately turn around quality-wise after that tactical snorefest, our favorite kaiju eventually found a perfectly fitting genre. 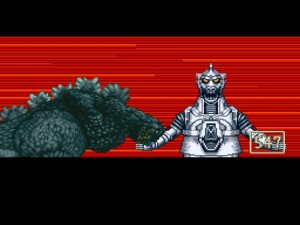 Toho’s Super Godzilla is a difficult game to describe. Through most of the game, the screen is split in half horizontally, with the top half showing Godzilla (or rather, the upper half of Godzilla) as he stiffly stomps through the environment, literally plowing through anything that gets in his way. The bottom half of the screen is a map of the environment that has indicators for recovery items, hazards, and the enemy monsters’ general whereabouts. Once you encounter the enemy monster, the game turns into a simplistic pseudo-fighting game that plays out more like a series of (barely) interactive cut-scenes.

The battle phases in Super Godzilla are visually stimulating, but quickly become a slog to play through. In an admirable attempt to replicate the flow of a kaiju battle from the movies, the game requires you to wait until Godzilla’s “spirit” meter is high before closing in on your opponent and punching him, which causes his defenses to lower. Once the enemy’s guard is down, you can perform one of Godzilla’s signature moves (tail swipe, atomic breath, and… flyingheadbutt??). It sounds like a faithful translation of Godzilla’s cinematic duels, but the excitement fades away once you realize how shallow and repetitive the gameplay is.

This game feels like it was meant to be one of those cheesy FMV-heavy games that were so prevalent on CD-based consoles in the 90’s. It just  feels so strange being forced to watch an animated cut-scene of Godzilla’s tail smacking his opponent 20 times in a row in a Super NES game. The cut-scene animations admittedly look very nice, with large, detailed renditions of the monsters, but it becomes difficult to suppress the boredom when you realize how little substance there actually is.

Rating: 3 (out of 7) –Super Godzilla is commendably accurate to its source material in tone and structure, but ultimately too boring to recommend. 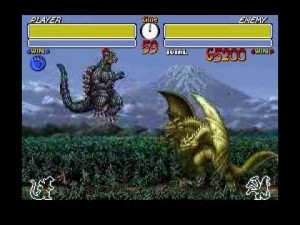 Yeah, yeah, I know I said I’d try to focus on the Godzilla games that made it out of Japan, but I figured I’d shine the spotlight on the one import Godzilla game that I own, seeing as how it’s one of the best Godzilla games ever released. “Monster War” is a tournament-style 2D fighting game in the vein of Street Fighter II that allows you to select from eight monsters to use in a series of one-on-one battles.

Despite being obsessed with technical, systems-heavy the likes of which developer Arc System Works is famous for, I’ve always had a soft spot for gimmicky Street Fighter clones, and the Super NES/Famicom was absolutely drowning in them. Games like Teenage Mutant Ninja Turtles: Tournament Fighters and even the reviled Clayfighter bemused me, and Godzilla: Monster War lies firmly in that camp. In terms of gimmicky 90’s fighters, it’s upper-tier material and better than atrocities like Ballz 3D and Rise of the Robots by orders of magnitude.

The game still looks and sounds great, with each monster sporting unique, fluid animations that give them plenty of personality. Sure, the mechanics won’t hold up very well under high levels of scrutiny and it’s easy to be cheesy, but what you’re given is a competent Street Fighter II knock-off that lets you play as the most iconic monsters from the Godzilla movies. And what kaiju-loving kid in the 90’s would have scoffed at that? If only Toho had waited a year and released this overseas instead of Super Godzilla.

Rating: 5 (out of 7) – It might cause hardcore fighting game fans to roll their eyes, but Godzilla: Monster War is the Godzilla game we desperately needed in the 90’s. 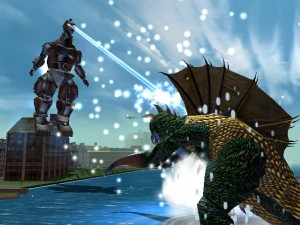 While 90’s kids never saw their hopes for a great Godzilla game fulfilled, those who grew up in the “aughts” had better luck. Pipeworks Software, the developers of Destroy All Monsters Melee (DAMM), clearly had a firm understanding of what makes the Godzilla films appealing, and they essentially made a 3D version of SNK’s classic arcade game King of the Monsters.

DAMM plays a lot like a wrestling game, sans complicated grappling mechanics. Each of the 11 playable monsters has a variety of different attacks, and it’s great to see their signature cinematic moves faithfully translated to a polygonal brawler. While the single-player campaign isn’t terrible, it’s rather brief, and most of the game’s fun lies in its multiplayer mode. Up to four players can fight simultaneously, and time will fly by when taking part in a kaiju battle royale with a group of friends. You’ll have a difficult time not quoting WWE wrestlers while slamming monsters into Gigan’s chestblades. “Kaijumania is running wild, brother!”

DAMM’s reputation suffered a bit when updated ports and too-similar sequels were released several years later. The sequels (Godzilla: Save the Earth and Godzilla Unleashed) expanded the monster roster significantly, but did little to evolve the gameplay and were overshadowed by gems like 2003’s War of the Monsters, which was a more polished game that sadly lacked the Godzilla license. “Sequelitis” might have tarnished DAMM’s legacy, but it is still the best Godzilla game released up to this point.

Rating: 6 (out of 7) –DAMM and its sequels do a great job of acknowledging the goofy professional wrestling-inspired heart of the 60’s Godzilla films and are a blast to play with friends.