In recent times there has been a lack of arcadey couch multiplayer racers, its because of this that Targem Games brings BlazeRush, an action-racer that aims to focus on delivering a hectic and fun multiplayer experience. 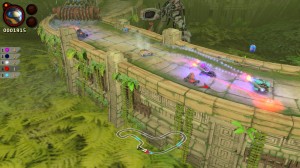 As soon as you load the game up and start playing, you’re greeted with a very familiar feel that harks back to the joys of games like Micro Machines. You’re given a choice of single, and multiplayer modes each with their own variety of options.The single player pits you against various amounts of AI players with varying difficulties in competition to win various challenges. Some of these challenges might be simple races, time trials, and there is even an elimination mode where a players must race to be the last to be destroyed by a giant death machine. As you complete levels, you win cups for each of a level’s objectives. These cups are the sole method of progression, as more cups unlock more levels and more cars. Each car has a unique feel, and is smartly designed to be better for some challenges than others, meaning car choices matter, and you get a good feel for how each vehicle handles, and figure out pretty quickly when they should, and shouldn’t be used. During each race, various weapons and boosts such as machine guns, saw blades, and homing rockets are dropped and each one feels unique and has very clear uses. It’s only possible to destroy cars by knocking them off the track, so smart usage of these weapons is the key to success and adds a nice level of strategy to the mayhem that unfolds on the track.

Multiplayer gives much the same o 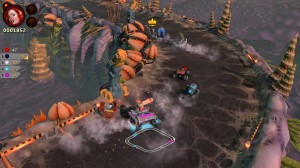 ptions as single player but with the added ability to play locally, online and with bots. There is also a gametype voting system to make sure players always get something different to stave off boredom. Multiplayer seems to be the real draw of BlazeRush, as knocking someone off the track to their fiery death is just that much more satisfying when you do it to a friend sitting right next to you.

In the audio/visual department, BlazeRush evokes a similar feeling to Rock n’ Roll Racing, with very distinct, if slightly generic track themes with a 0catchy but also generic electro-rock soundtrack. During races however, explosions and weapons get a nice sense of satisfaction and player feedback is great right down to the whimsical over the top suspension each car has.

Review 6 (out of 7): BlazeRush aims to do one thing, bring back the laughs of old couch multiplayer racers, and it does that in spades. The game lacks a unique art style and distinct single player gameplay, but the multiplayer is the real draw here, If you have some friends and just want to to see them fly off a track and explode, BlazeRush is for you.