We covered the Batman, now it’s time to cover the Superman part of Batman V. Superman. Since, we started with Batman’s origins from his Animated Series, it is only fitting to do Superman’s as well.

Unlike Batman though, Superman’s origins are the things first covered in the series, in the 3-part series premiere, The Last Son of Krypton.

With destruction raining down on the planet Krypton, Kryptonian scientist and Council member Jor-El uses the precious remaining moments to secure superbaby Kal-El in a rocket that will spirit him to an uncertain future on Earth. Young Clark Kent discovers the truth about who and what he is. Upon reaching adulthood, he assumes his birthright as the Man of Steel, and the legend of Superman is born in the city of Metropolis.

Superman: TAS not only kicked off with a bang, but with a long-term game plan in mind. Tying Brainiac into the destruction of Krypton was a master-stroke, and it only becomes more relevant as time goes on. Kryptonians’ reliance and trust in technology was their ultimate downfall, and it is still a scary thought for many in the real world. 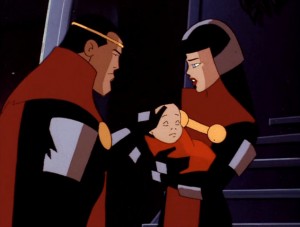 The arc also does a good job of fleshing out Krypton before its destruction. It was a brave decision to make the entire first episode focus on the planet’s destruction and not feature Superman in any capacity other than the infant Kal-El. The second episode starts off with Clark’s arrival to Earth, but this episode is a bit more sped up then the previous. I would have liked to spend more time with Clark in Smallville with his friends and his folks, but that wasn’t in the cards yet. Unlike Jor-El and Lara, Ma and Pa Kent are able to be fleshed out throughout the rest of the series, but it was disappointing to spend so little time with them here.

The final part of the premiere is more of an introduction to Superman’s popular supporting cast including Lois Lane, Lex Luthor, Jimmy Olsen and Perry White. The plot isn’t that all important in the grand scheme. It’s Superman vs a robot, and really the most disappointing point of the three-parter.

One of my favorite Superman tropes (Which Man of Steel didn’t do) is that Lois Lane tends to name Superman… well Superman and this show was a bit creative with it. 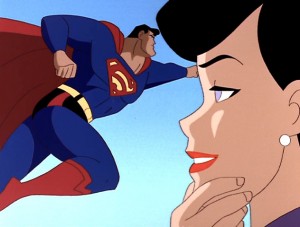 If you’ve never seen Superman: The Animated Series this is a great (and really only) place to start. It does a lot to drop the foundation that the show would run with over the course of three seasons.

Next Up on The DC Animated Chronicles: Justice League: Paradise Lost.