For those of you keeping score at home, it has been a little more than a year and a half since Batman v Superman: Dawn of Justice was announced, and it will be about another year and a half before the film is released in theater.

To pass the time, we usually do various recap series like The Man of Steelcast, Project Batman, From Fandom with Love and The Amazing Spidercast, but there is literally nothing in this new-fangled DC Cinematic Universe, but Man of Steel, and while I like that movie even I think watching it 70 times would drive me nuts.

Instead, we’re going to back to recap DC’s more noted entertainment ventures, their push into animation. However, this will come with a slight twist. This will be a list organized not by show or airdate, but a loose continuity of an introduction to the world of DC, it’s most popular heroes and villains and their biggest challenges. So join us for this year and a half long celebration! 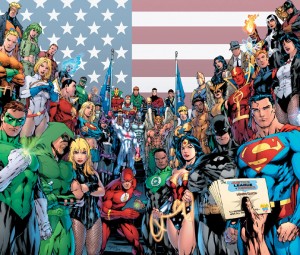 Secret Origins of the Justice League Are you ready to begin?

This part of our series will take a look at the origins of DC’s Justice League with a focus on the Trinity. We have a mixture of on-screen origins for Batman, some Wonder Woman and of course Green Lantern.

The Rogues’ GalleryA hero is only as good as their villains, and we look at the early appearance of some of the biggest and baddest. (Trying to focus on those that have been confirmed or rumored for the Cinematic Universe)

Anytime the Trinity has teamed up, mostly Superman and Batman.

World’s Greatest SuperfriendsBranded together from the far reaches of the universe, we begin to examine how the Justice League forms and the greatest trials and challenges of a super-powered team.

Anything below this point will be tackled depending on the time left.

Now the schedule for this isn’t set it stone. As of today, there are 495 days until March 25th, 2016 (the release date of Superman v Batman: Dawn of Justice) or roughly 71 weeks until release. The schedule is a bit more than 70 episodes/DTVs, but some will be doubled up either because two-parter or makes sense story-wise. There will also be lulls for other projects (including our countdown series to The Avengers: Age of Ultron and various other new DC-Animated films). That said, we will do our best to keep to a one a week schedule. Join us and share your own thoughts!