The DC Animated Chronicles: Superman TAS – Blast From The Past

General Zod was never used in Superman: TAS or the Timmverse as whole, but we did get a stand-in (Somewhat) in Jax-Ur. While he is a comic character, he was more General Zod in depiction. He, along with Mala, appeared only in the two-part episodes, “Blast from the Past.”

Superman decides to release Mala, a Kryptonian criminal, from the Phantom Zone, but when Mala proves too power-hungry for this world, Superman tries to send her back. Mala escapes with the Phantom Zone Projector and releases Krypton’s most notorious traitor, Jax-Ur.

This story is hard to review in hindsight. Since we’re doing this series after the release of Man of Steel, it bares a lot of similarities to Zod’s origins in that (And Superman 2), and I just feel like Mala and Jax-Ur can’t compare to the characters of Zod and Faora, who are helped by the fact much fresher in our minds.

Not that isn’t to say this isn’t a solid episode. The first in particular is really strong. With Mala coming out of the Phantom Zone, and trying to live up to Superman’s ideals, but power corrupts. And no one has more power than a Kryptonian on Earth. 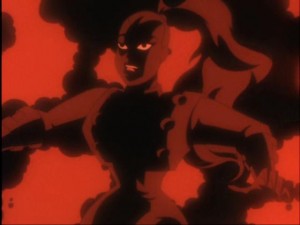 The Phantom Zone is also fairly interesting from a design perspective in this. But as a whole, not the strongest parts of Superman TAS

Not necessarily a good memorable moment, but one of those random things that stick with you.

At some point, Lois Lane responds to Mala, “Then I’m Wonder Woman” which is a nice Easter egg to fans. Except this universe continues on, and it is established that “Wonder Woman” the moniker doesn’t exist until Justice League which takes place years after this show ended.

I realize one of those extremely nerdy pickings, but its a thing!

Next up on here Lord Darkseid appears!