A few weeks back, we covered Wonder Woman’s “origins” in the Timmverse, while it wasn’t a complete origin nor a solo affair, it did the job solidly enough. It wasn’t until 2009’s Wonder Woman that the Amazon Princess got her solo outing, and to date remains one of the besst DC DTV produced.

Below are our thoughts on Wonder Woman!

On the mystical island of Themyscira, a proud and fierce warrior race of Amazons have raised a daughter of untold beauty, grace and strength Princess Diana. When an Army fighter pilot, Steve Trevor, crash-lands on the island, the rebellious and headstrong Diana defies Amazonian law by accompanying Trevor back to civilization. Meanwhile, Ares (the god of War) has escaped his imprisonment at the hands of the Amazonians and has decided to exact his revenge – intending to start a world war that will not only last for centuries but will wipe out every living being on the planet, starting with the Amazons! It is up to Princess Diana to save her people and the world by using her gifts and becoming the ultimate Wonder Woman!

Wonder Woman has everything you would want in a superhero origin tale. It has a detailed, but condensed version of the origins that gives you a great set-up of the character, her supporting cast and the world in which she will inhabitant.

You get a threat that isn’t necessarily tied directly into the hero, but connects with her journey and becomes an ultimate challenge near the end of the movie.

But more than anything, you get intelligent action. The movie slowly ramps up its set-pieces always making sure to tie into the larger narrative in an important manner. It culminates in a pretty electric war, and the film has enough humor sprinkled throughout to never get too dark. Even though the movie is extremely brutal at times. 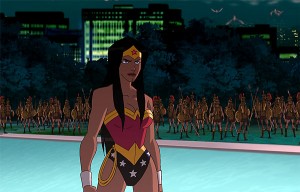 The movie is matched with some fantastic voice work including Keri Russell as Wonder Woman and Nathan Fillion as Steve Trevor (dude is always expected to be DC’s ace pilots, I guess). The two are the heart and soul of the movie, and they do a terrific job of really showcasing these two budding friendship and their own introduction to each other’s world.

This is a mostly original tale so I would also like to note the character designs in this are top-notch. Particularly fond of Wonder Woman’s design, she has this element about her that makes her appear larger than life. I think it’s her sharper features especially when it comes to facial structure.

This film is full of great moments, and sadly my favorite isn’t on Youtube. So here is my second favorite, do not attempt to rob Wonder Woman especially when she is in a foul mood!

My favorite moment, if you’re interested in that, is most of the final fight. Steve firing the “invisible missiles” or Ares calling out to his father for help.

That will do it for Wonder Woman.

Next on The DC Animated Chronicles: Green Lantern: First Flight