Just when you thought things were returning to some semblance of normal (as normal as things can be when your orgasms can stop time, you’ve robbed a bank, and there’s a shadowy group of Sex Police on your tail), the conclusion of the last issue saw (spoiler alert) a wrecking ball destroy Suzie’s library. Naturally, we’ll pick up where we left off – WRONG! The first two pages show us children playing on a jungle gym, teenagers boning, and adults snorting lines of blow. I’ll admit when I first saw our female narrator I thought we were looking at another Suzie flashback, but the popped collars and rampant booger sugar usage show we’re beyond her timeline. Ladies & Gentlemen – introducing the one, the only, Ms. Jazmine St. Cocaine. 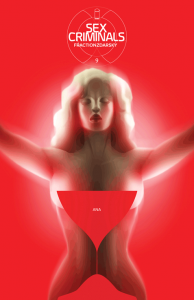 I used to think this series could be adapted into a movie, and it still can if it streams on Brazzers. This is by far the raunchiest outing yet, so if you read Sex Criminals for the sex (naughty naughty!) this book is for you. I wonder who really inspired Ms. St. Cocaine. Jasmine St. Claire is the obvious name reference but her academic streak reminds me Nina Hartley or Asia Carrera and… I’ve said too much. My final porn-related thought (for this article, at least): I liked the mini-nod (intentional or not) to Bella Knox, with Jazmine admitting to multiple university transfers when she would get recognized. Yep – the series’ famed mattress actress is all about higher learning.

It’s not just the dirty drawings that make this book fun – it’s the tiny jokes peppered throughout. From store names (“Tiny Expensive Food”) to porn titles (“Les Jizzerables”), the gags alone are worth your money. I laughed, but Fraction’s writing also makes me care about Suzie and Jon’s relationship. Things have been tense recently and 9 issues in I just want these crazy kids to make it work. There’s a creatively structured couple-fight using alternating panels as a sort of commentator, and while it relieves the tension of seeing another shouting match, the argument is very real. I wonder if maybe our leads, despite their similar sexual superpowers, are really going to last the duration of the series.

The little non-conformist in me (ok – I’m little but the non-conformist is HUGE) almost wants to be annoyed at the popularity of this title but damn if I’m not charmed every book. I was worried the series would lose steam after we finished the bank robbery plot, but Matt and Chip keep widening this world. Now we’re looking at the possibility of adding to this motley crew of degenerates, maybe even a team (The Sex-vengers? The Sex-Men? The Just-Sex League?). I’m definitely excited for the next issue.

Review 7 (out of 7) – Readable and re-readable, cover to cover, even the letter pages. And for that you deserve my first perfect score. You are my first, Sex Criminals. Was it good for you too?