Tyler and Sebastian battle for control in “Fight Club 2” while the Eternal Warrior fights off the apocalypse in “Book of Death”- all in this week’s reviews from Dark Horse and Valiant Comics. 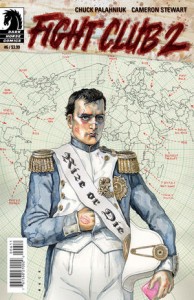 Following Angel Face’s return, issue 6 reveals another character we met all those years ago (though I won’t spoil who). The reunion is darkly hilarious and one of a number of high points in a title that has been hit or miss (story-wise that is – Stewart’s art is always on point for wherever Palahniuk’s sick sense of humor wants to go). This entry is a welcome hit after last issue almost made me want to wash my hands with the series. But my love for the original makes it hard to pull away completely. Damn you, Tyler.

“Fight Club 2” is at its most interesting when it’s postulating and conspiracy theorizing from warped perspectives, less so when it’s trying to shock us or get metafictional. The Kennedy assassination, ideas having more control over humanity than the other way around – Palahniuk really gets his hooks into you with gnawing ideas rather than guts and filth. I find myself less interested in Sebastian’s search for his son than the weird trail that will lead them there. The battle between Dr. Jekyll and Mr. Durden intensifies but who can Sebastian trust? How big is Tyler’s army of space monkeys.. and is Tyler really the only one at the top? 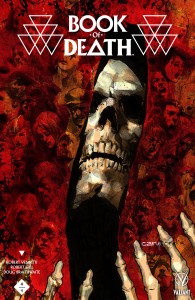 Released on the same day as “Book of Death: Legends of the Geomancer”, I realize far too late that both of these miniseries are serving as a lead into Venditti’s “Wrath of the Eternal Warrior” title starting up next month. “Legends of the Geomancer” shows us a young and bold Gilad while this last entry in the “Book of Death” event has a weathered Gilad against his biggest threat yet. Teamed up with Tama, a young Geomancer from a far-flung future, Gilad has zeroed in on Master Darque and his corrupting influence on the Geomancer of our time.

Issue 4 sees Unity regrouping and enlisting occult expert Punk Mambo for the final battle. It was nice seeing Capshaw, Neville, and of course our heroes again but I have the same minor gripe whenever I see Ninjak written by anyone other than Matt Kindt – he’s too chatty. I liked seeing Gilad and Tama’s relationship over this series. It’s less father-daughter and more athlete-stern coach, with Gilad coaxing Tama to reach her full potential. Venditti’s gift is keeping his stories very human even with very super-human events taking place. And it’s only fitting in a story that revolves around the Geomancer that Gill and Braithwaite create some lovely outdoor scenes to contrast with visions of Darque’s hellish power.

“Book of Death” wasn’t what I expected but it delivered a unique tale with a satisfying end. I thought I had the general trajectory of this finale all figured out after issue 3 but Venditti managed to surprise this cynical reviewer. This has built up my anticipation even more for Eternal Warrior’s solo series.