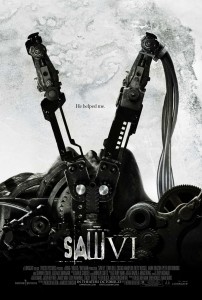 After the dismal, filler-laden Saw V, it was clear that changes had to be made to keep the series relevant. For a horror series with annually-released entries to still be successful six movies in is impressive, but diminishing box office numbers and fan interest were becoming a real threat by the time Saw V landed with a dull thud. Fortunately, Saw VI is a vast improvement over its predecessor and takes the series in an interesting new direction.

The appeal of previous Saw movies lies in their unflinching audacity and creative death sequences, and despite the absurd nature of the series’ central premise, these movies took themselves very seriously. In an inspired move, the writers and director of Saw VI decided to take it in a more satirical direction with a plot revolving around the heated health care reform debates that consumed the United States after the 2008 presidential election. By making employees within the much-maligned health insurance industry the victims of serial killer Jigsaw’s horrific torture devices, the writers give audiences what they want while maybe – just maybe – also giving them something to think about.

Jigsaw’s primary target in this entry is a man named William Easton, an executive of a health insurance company with little regard for his fellow man. William is a villain in the most cartoonish sense: he keeps a fish tank full of piranha in his office and  brags to people at parties about a formula he devised that determines whether a person would be a good candidate for health insurance coverage. Flashbacks reveal William sealing his own doom when he rejects John Kramer’s (AKA Jigsaw) pleas for insurance coverage for a risky cancer procedure. In the present day, William is abducted by Detective Hoffman (the “new” Jigsaw) and forced to take part in a series of deadly games alongside his own employees. 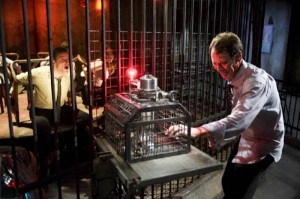 The scenes focusing on William’s ordeal are over-the-top and ridiculous in all the right ways, but sadly, the movie also has to deal with five sequels’ worth of narrative baggage as it desperately tries to make sense of its own convoluted web of events. Momentum grinds to a halt when we’re forced to watch Hoffman tiptoe around a federal investigation of Jigsaw’s murders, or Jigsaw’s widow Jill as she inches toward becoming a villain herself. While Saw VI often feels like a fresh new start for the series, it will make absolutely no sense to newcomers, which is a shame.

Sadly, Saw VI would prove to be the least successful film in the series at the box office. While it’s sad to see the best of the Saw sequels punished for the mistakes of its brethren, its poor reception turned out to be something of a blessing in disguise by forcing producers to finally devise an ending for the series.

Best Death: The final death scene shows a man being injected with dozens of syringes filled with hydrofluoric acid. The goopy mess remaining afterwards is one of the grossest sights in the series.

Genuinely Scary Moment: Saw goes literary again with an opening scene referencing Shakespeare’s The Merchant of Venice. Two insurance agents are forced to compete with one another over who can cut more of their own flesh off within a minute.

Review: 4 (out of 7): Despite its flaws and an unfortunate obligation to previous Saw movies, Saw VI is the second best entry in the series and offers some twisted dark humor. 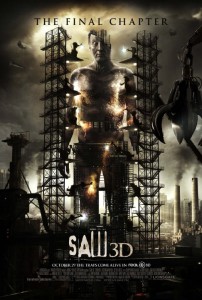 I have a confession to make. When I wrote my review for Saw V recently and called it the weakest film in the series, I failed to mention that I had not seen Saw 3D (AKA Saw: The Final Chapter) yet. Now that I have seen Saw 3D in its entirety, I can say with confidence that it is so unbelievably bad that it makes Saw V appear to be an accomplished film in comparison.

If Saw VI was a step toward social satire, then Saw 3D is a giant leap toward self-parody. Five minutes into the movie, watching three college-aged kids screaming at each other over infidelities while strapped to a buzzsaw contraption, I honestly thought the movie was messing with its audience. “This has to be a Scream-esque moment of genre parody and we’re going to find out that the scenario is some sort of performance art,” I thought. Nope. My hopes were shot down as I was condemned to an unbearable 85 more minutes of ineptitude.

As ridiculous as the ending twist for Saw VI was, it did make me genuinely excited to see the series go out with a story involving dueling Jigsaws (Detective Hoffman and Jigsaw’s widow, Jill). Instead of running with this idea, the writers decided to tack on a third Jigsaw who focuses on tormenting a self-help guru who runs a support group for survivors of Jigsaw’s traps, and the rest of the movie is Hoffman running around literally stabbing every person he sees as he pursues Jill. I guess Saw 3D’s idea of going out with a bang is by throwing as many traps on screen as possible, but none of them are remotely creative or interesting. 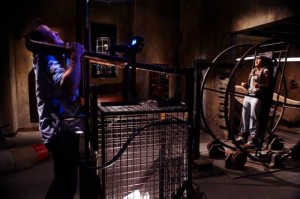 Even for a series that is somewhat notorious for bad acting, Saw 3D has some of the worst, most unlikable actors I have had the displeasure to witness. The movie runs the gamut of bad acting, too: you have annoyingly smug police detectives, obnoxious celebrity cameos (the lead singer from Linkin Park plays a white supremacist), and returning ham Cary Elwes making his bad performance in the original Saw seem downright nuanced.

I really can’t describe how awful and incompetent Saw 3D is. It’s not just the worst movie in the series; it’s one of the worst horror movies I have ever see. It might even be worse than Thankskilling. With its garish visuals (the result of the film being shot in 3D, no doubt), laughably bad story, and total lack of creativity, what should have been a lovingly-crafted swan song is an embarrassing cash-in. Avoid this one at all costs.

Best Death: We finally get to see what it looks like when the infamous “reverse bear trap” mask works as intended.

Genuinely Scary Moment: The realization that the movie isn’t meant to be funny or ironic was pretty scary for me.