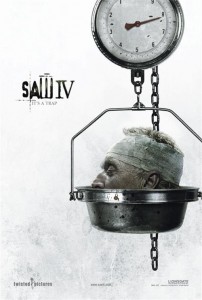 Considering the events that transpired at the end of the surprisingly decent Saw III, you would expect the next movie to be all about poor Jeff’s search for his daughter, who was kidnapped by the now-deceased Jigsaw and his also-now-deceased protégé. Instead, Saw IV opens with an almost comically gruesome and prolonged autopsy of Jigsaw, where doctors discover a wax-coated mini cassette tape digested by the killer shortly before his demise. The tape reveals that Jigsaw’s work is far from finished and that he will continue to “test” the wicked.

Instead of resolving any of Jeff’s leftover storyline, the film focuses on SWAT Lieutenant Rigg, who appears to be the object of interest for the latest iteration of Jigsaw. Rigg is taunted by a videotape providing evidence that Detective Matthews (the main character from Saw II) is still alive, but won’t be for long if Rigg doesn’t follow the rules of an elaborate new “game.” Rigg is targeted by Jigsaw because of his steadfast determination to save everyone – an obsession that Jigsaw feels is woefully misguided. Rigg is guided through a series of scenarios in which truly corrupt people (pimps, rapists, etc.) are able to be killed by Jigsaw’s contraptions. Jigsaw’s aim is to prove to Rigg the futility in trying to save those who he believes can only save themselves.

While the Saw series is prone to wickedly mean streaks, Saw IV feels particularly mean-spirited. Previous main characters have been crooked, corrupt, or misguided to a certain extent, but Rigg seems like a genuinely good dude whose only sin is putting himself in danger to save the life of his fellow officers.  I know the new Jigsaw is supposed to be more vicious and “unfair” to his victims, but it’s a little ridiculous to expect the audience to enjoy watching a stand-up guy like Rigg being put through such awful experiences. Compounding the moral dissonance is the series of flashbacks that reveal Jigsaw’s tragic backstory. The film can never settle on a consistent tone. 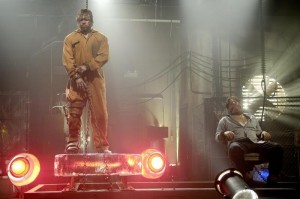 But morality is not what draws people to the Saw series, is it? For most fans, the appeal is in the creative use of gore, and Saw IV lies somewhere in the middle of the pack in that regard. Jigsaw’s victims are scalped, dismembered, and decapitated, and the effects are just as gooey as horror fans demand for them to be. The gross-out moments are still mostly effective, but the series is starting to feel a bit stale at this point. Still, considering the annualized release schedule, the fact that the series can entertain at all with the fourth installment is impressive in itself.

Best Death: While “hanging tough” by one of Jigsaw’s contraptions, our favorite New Kid gets his head smashed like a watermelon by a pair of gigantic ice blocks

Genuinely Scary Moment: The reveal that Jigsaw’s iconic puppet was originally meant to be a child’s toy is creepy – and unintentionally hilarious.

Rating: 3 (out of 7) – General horror audiences might be feeling like enough is enough at this point, but Saw IV remains watchable for series devotees. 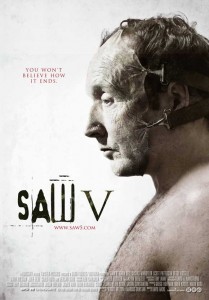 For the second time since its release, Saw V has proven to be my personal breaking point. It’s not that it’s truly terrible, but it’s a lazy rehash that is so disdainful of its audience that it attempts to stretch the final twist from Saw IV into a full-length film. The big reveal that the creepy Detective Hoffman (who looks like a cross between Tom Hardy and Willem Dafoe) was Jigsaw’s secret backup protégé all along was not very effective to begin with, but now we have to sit through a boring series of flashbacks that show how he became the villain.

When we aren’t watching flashbacks that retcon previous Saw films to explain Hoffman’s contributions to Jigsaw’s games, we’re mostly following federal agent Strahm as he desperately tries to link Hoffman to the Jigsaw killings. Unfortunately for Strahm, Hoffman is always at least one step ahead, and make the act of framing an FBI agent look laughably easy. And because it’s a Saw movie, there is a also a subplot about a group of annoying people doing a poor job of avoiding death. 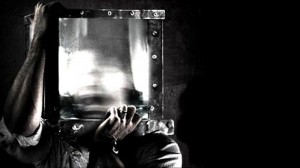 Saw V also reuses Saw IV’s eye rolling-inducing gimmick of a chronologically inconsistent narrative to a sickening degree. Suffice to say, Saw V is no PulpFiction, and the jumbled narrative only serves to stretch and pad out the series as much as possible. By the time all is said and done, it doesn’t feel like the story has progressed any further than where it was when the film began. The movie is just an all-around disappointment, and while the gore effects are still effective, there’s little else to admire.

Best Death: The opening death – an ode to Poe’s Pit and the Pendulum tale – makes up for what it’s lacking in creativity with plenty of gooey guts.

Rating: 2 (out of 7) – The weakest film in the series does little more than tread water for 90 minutes.