Comic Review: Serenity No Power in the Verse #2 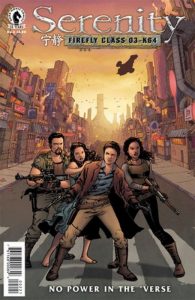 Serenity: No Power in the ‘Verse #2 feels a little bit more like Firefly with writer Chris Roberson continuing to mine the character of Jayne for comedy gold while broadening the series’ conflict as the Peacemakers tell Captain Mal and the crew of Serenity that they mean to topple the Alliance from within. On the action front, artists Georges Jeanty and Karl Story gift Browncoat fans with a spectacular martial arts fight between River Tam and her “sisters”, who she used to train with to be an assassin for the Alliance. Except it is still very difficult to tell different female characters apart without the help of verbal context because they neglect to differentiate their facial features.

Underneath its quippy dialogue and Western aesthetic, Firefly and Serenity have always been sandboxes for ethical disputes. (Please tell me that there is an Ethics of Firefly class at a university somewhere.) With Captain Mal always on the run with his crew and going from job to job and planet to planet, he makes his own right and wrong. This isn’t Star Trek; there is no Prime Directive. The moral battle in No Power in the ‘Verse #2 is between Mal and Simon Tam. Simon sees the Peacemakers as terrorists because they target civilian areas whereas Mal sees them as freedom fighters and justifies their actions by talking about how the Alliance took out civilians and refugees in the wake of the Battle of Serenity Valley as well as some on his home planet of Shadow.  Even though he is less violent than Mal, Roberson doesn’t make Simon a very likeable character as he gets all hoity, toity about their current planet’s selection of shoes compared to Osiris causing his girlfriend Kaylee to march off in a huff wearing an adorable hat.

At first, No Power in the Verse #2 seems like a “planning” issue where Captain Mal and Ms. Thompson, the leader of the Peacemakers, put together a plan to take action against the Alliance by rescuing their old friend Bea and setting up the next issue. But, thankfully, Roberson keeps things exciting and throws a curveball by bringing in River’s former captors as a source of conflict and giving them yet another person to rescue. There might be a few too many balls to juggle for a six issue miniseries, but it will be interesting to see the sparring Simon and Mal’s reactions to this big event.

Jeanty and Story have issues with faces, but the rest of their isn’t half bad playing off some of Roberson’s comedy like when Jayne has the bright idea to get his mom to knit a “Jayne hat” for Zoe’s daughter, Emma. Wes Dzioba goes pretty garish with the coloring on his sweater as a touch of life in a dark time for Serenity‘s crew and in marked contrast to the dull, bronze armor that River’s fellow assassin trainees wear. Shadow is the defining trait of the art and colors in No Power in the ‘Verse #2 as Mal and his crew might end up going a morally shady way.

Serenity: No Power in the Verse #2 still isn’t terrible and has some fun and exciting moments, like any time Jayne pops up, the reveal that the crew of Serenity could possibly be involved in a plot to take down the Alliance forever instead of just getting by, and the big hand to hand fight at the end, to balance out the pedestrian art.