“King: Phantom” makes me laugh, “Unity” goes in depth on Livewire, “Django/Zorro” sets up for violent finale, and “Bloodshot Reborn” kicks off a new series, all in this week’s reviews. 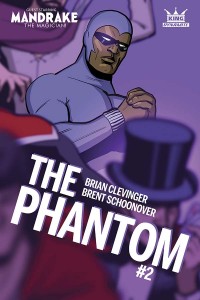 I wasn’t very nice to issue one. I felt lost going in and even more confused and underwhelmed coming out. Well, this book sidesteps Phantom action by sending our two leads undercover to investigate a crime syndicate. The result is a buddy cop-esque ride with a cameo by Mandrake (which inspires a zany action set piece), all under an in medias res structure. Touche, Phantom – you’ve surprised me. The clean art style may lean a little too clean if you know what I mean, but overall I dug the book. 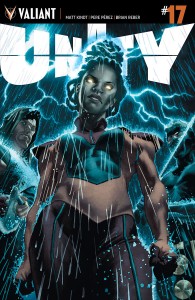 With Zephyr quitting back in issue 14 we’ve been treated to the remaining core members of G.A.T.E. individually recovering from some as-of-yet unknown battle. So far we’ve followed Ninjak, Gilad, and now we’re with team leader Livewire aka Amanda McKee (for the uninitiated: a “psiot” who can communicate with computational tech). Well, how’s she doing? “This was the worst ducking day I’ve had in a long time.. I feel like it’s literally grinding me down into nothing” she dictates, complete with AutoCorrect censor. Personal and professional problems pile on for the woman who can telepathically read her dinner date’s text messages.

Each of the last 3 books has gone over the price of battle beyond the physical scars. It has been an interesting triptych conveying the fight to stay grounded when you’re back at home, out of harm’s way. Perez’s smooth art style complements the story by emphasizing the mundanity of Livewire’s state. If a character piece is too slow for you, next month looks to rock n roll by showing what kicked the team’s ass so hard. 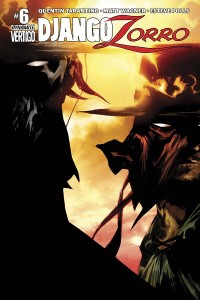 I love don Diego’s foppish facade. Just when I think he’s hit all the notes he shouts in terror at the name of his own alter ego. Last issue saw Django Freeman in full Zorro garb and in this installment he gets to show some scoundrels justice – bounty hunter style. If the connection between the railroad men and slavers hasn’t been made abundantly clear by now, Django proclaims the Arizona crooks as “the same sort of dickless humps I spent my whole life runnin’ from” before finally declaring “some sonsabitches just need killin’!”

For a title that has dragged here and there (although Polls’ perfect Western art has been solid through out), this was a meaty issue. Harsh violence is dealt out to the guilty and innocent alike, Caballero Batman and the Fastest Gun in the South come to a disagreement in their methods of dispensing justice, and the underlying drama of the fraudulent Duke of Arizona builds to a crescendo. His bride Conchita is even being fleshed out in this penultimate issue, reacting to her husband’s cruelty towards those of her own indigenous background. With a shocking conclusion, the final issue looks to be a bloodbath of Tarantino proportions. 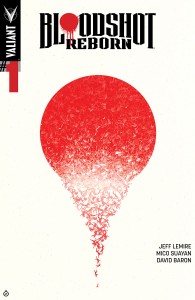 One of my favorite things about Valiant books are the recaps. “Who was Bloodshot? … Guns… lots of guns.” A nanite-infused super soldier, Bloodshot has been slumming it in Colorado as a handyman for a run-down motel since the events of “The Valiant” 6 months prior. But when a near-lookalike shoots-up a movie theater and the hallucinations(?) just won’t quit, it’s time for action.

More than just a “reformed killer forced back into his old ways” routine, “Bloodshot Reborn” looks to ask some questions – about Bloodshot, about violent characters, and maybe about violence in America. The choice of the first arc’s villain committing a frighteningly similar atrocity to the tragedy in Aurora was not done at random. From the intensely detailed realistic style (credit to Suayan and Baron for breathing life into every page) and dark tone, it looks like Lemiere will be taking Bloodshot on a path separate from his shoot ’em up roots.