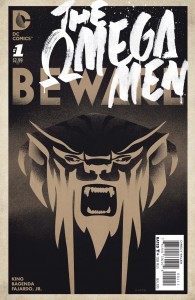 It is always exciting when a lot of new series start in an existing line like with DC. I still remember checking out a ton of the New 52 stuff and probably gravitating to a lot of things I didn’t even expect to. So of course I chose one of the weird new series in Omega Men, a group of characters that apparently only had a real run in the 80s and a couple of issues in the mid 2000s. When the preview said they are a team of intergalactic criminals that killed Kyle Rayner, I just had to give it a shot.

Boy, was that a mistake. The comic starts in medias res and we are watching the Citadel Soldiers hunting down the Omega Men. They mostly speak broken English or in an incomprehensible language that looks like the Predator writing. There really is barely any context for their actions. Are they the good guys because they look for the guys that killed Rayner? Well they do look somewhat evil though and kill some innocents, so I guess they are bad? Also, why do they care if Rayner died in the first place? Already you have no clue about anyones motivation and it doesn’t get much better once the Omega Men themselves show up. They don’t get any introduction, barely talk themselves either and by the end of the comic, I guess I am supposed to think they are the good guys. I still have no real clue who these guys are or what they want. What actually happens in this issue could probably fit into a couple of sentences.

Clearly no one thought this first issue of a new series could have been picked up by someone, who didn’t follow the last year, or more, of DC continuity. I mean how likely is that, right? They only thing that saves this of being a total disaster of a first issue is the art. While the environments in this issue are a bit bland, the characters just look great. The reveal of Tigorr just looks incredible, very life like which is crazy for what looks like a character out of Thundercats. The coloring is also quite good and at times gives the whole thing a watercolor feeling. It especially creates some beautiful lighting effects, which I haven’t seen in comics in a while.

Review 3 (out of 7): Beautiful art married with almost non-existent storytelling. This might be ok for people that followed all the DC happenings over the last few years, but it doesn’t respect the newcomers at all.