The day is finally here, and while it’s been publicized for quite some time that issue #50 would bring a close to Venditti’s acclaimed run, it’s still no less a shock to be reading the “LAST ISSUE” (well, as final as anything can be in the world of comic books). Finding his modern day Visigoth kingdom embroiled in a 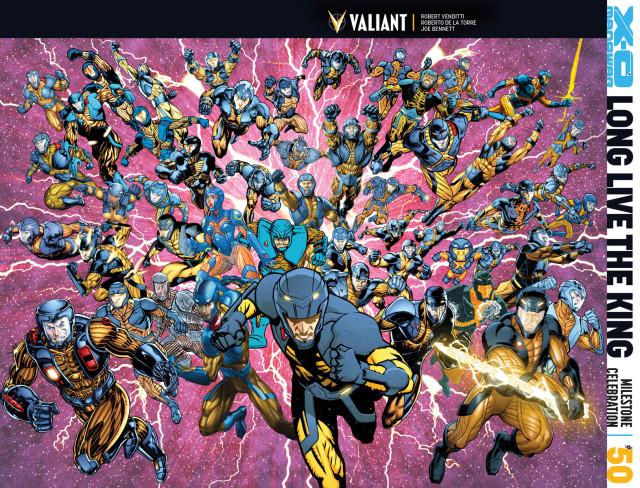 bitter ethnic clash with a group of Vine refugees, Aric of Dacia was already spread thin trying to keep the peace. But the wearer of the divine Shanhara alien armor could not have predicted that the Torment (a seemingly indestructible intergalactic race that is essentially armageddon personified) would crash the party. With zero alternatives an uneasy truce had been imposed but the Visigoth king/Vine messiah has just been absorbed by the Torment, infinitely straining an already hopeless situation.

What I didn’t predict was the Torment serving as a “Greatest Hits” device for the series. Floating inside the vast unknown within one of the Torment, Aric’s memories swirl all around him, leaving multiple double page spreads which are both crammed with images yet decidedly uncluttered. From fighting the Roman Empire, cruel slavery under the Vine, battling the 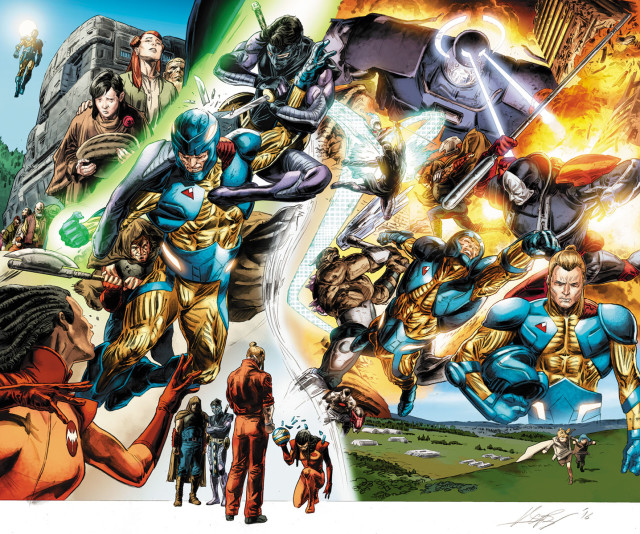 superhero team Unity upon his return to 21st century Earth, his wedding to Saana, and much more, Venditti highlights Aric’s journey and growth as a king as well as honoring the various artists who have contributed to “X-O Manowar” over his 5 year run. Also, by having Aric out of the picture, we get to see our supporting cast really shine: Colonel Capshaw shows her trademark grit, Armorine Gunny Lewis gets POed, and Commander Trill maintains his relentless belligerence. Even the members of Unity (sans the Eternal Warrior, of course) get into the fray and remind me “Why did their team book have to end again?” I won’t spoil how the final battle comes to a close but the conclusion solidifies the Vine Priest’s final lines declaring Aric to be the “champion of all worlds”.

As if the record setting comic jam cover wasn’t enough – THERE’S MORE! Fred Van Lente shares a time-traveling revenge story featuring Neela from “Ivar, Timewalker” and Aric which carries his lightheartedness with some harsh realities about warfare and past crimes. “Faith” scribe Jody Houser pens “His Greatest Failure” which has Ninjak reflecting on his “foe-turned-friend” relationship with the Visigoth king while he cleans a Vine Planting safehouse. Javier Pulido’s simple style dominates the page, choosing to leave the super-spy mostly hidden but having his ninjustsu skills (and the devastation they wreak) fully on display. And last but certainly not least, an enigmatic piece from Matt Kindt and Tomas Giorello set on a distant world in a time only described as “much later..” leaves a surprise that will keep X-O salivating until 2017.

Issue #31 was my entry point into Veniditti’s run. His tight action and character dynamics got this “too good for superhero comics” comic book reader to try other X-O issues. It wasn’t long after that I took a deep plunge into the Valiant Universe, discovering the line’s many talents on all sides of the panel. All the while “X-O Manowar” has consistently been my favorite title, one I looked forward to every month. The Wedding Issue and the issue depicting Loam’s destruction both brought me to tears for completely different reasons. At it’s best, the series served as a polemic against excessive conflict and even commented on current world issues (refugees, counterinsurgency). Not bad for a story about a barbarian in alien robot space armor. For Aric’s send off, we get a battle against ominous space beings set in Manhattan, an “it’s full of stars”-level acid trip around the universe, and (as always) a lesson about the fragile balance between peace and war.

Review 7 (out of 7) – a resounding send-off for a king and Valiant’s premiere title. Killer art from cover to cover, interesting & varied stories featuring a diverse team of talent. Long live X-O Manowar! Long live the king!