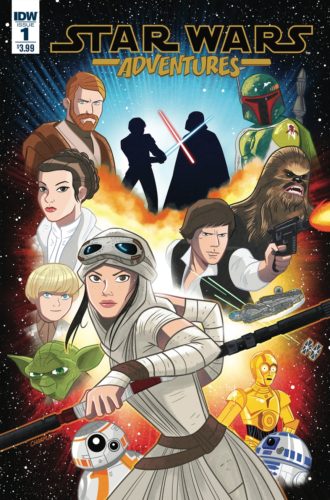 Even though Marvel publishes the “main” Star Wars comics, IDW gets into the fun with Star Wars Adventures #1, an all ages friendly dive into the galaxy far far away. The lead story written by Cavan Scott (Doctor Who) and drawn with on-model cartoonish glee by Derek Charm (Valiant High) follows the adventures of Rey pre-Episode VII when she was a smuggler on Jakku. It’s the first time as far as I know that Rey, the breakout star of The Force Awakens has gotten her own comic, and her vibrant personality and drive to survive in the harshest conditions makes for an entertaining read. It’s a multi-part story, and Rey getting caught in the middle of a couple of squabbling crime lords creates an intriguing plot inside the extremely narrow timeline that Scott has to work with thanks to Rey’s main story developing in the new Star Wars film trilogy.

With his work on the underrated Starfleet Academy along with Jughead and Valiant Academy, Derek Charm is becoming one of my favorite artists on quick paced humor and action books. His Rey is both fierce and caring going from fighting and escaping henchman for her town’s new kingpin to taking a break to care for a cute little critter. Explosions, close-up’s, and diagonal panels keep the story moving with Scott adding the occasional caption box to check on how Rey is feeling. His art makes reading the first story of Star Wars Adventures #1 like a cross between watching an old pulp serial and new-school cartoon.

The backup story by Scott with art from Jon Sommariva (Batman/Teenage Mutant Ninja Turtles Adventures), Sean Parsons (Deathstroke), and Charlie Kirchoff (Doctor Who) features the worst part of Attack of the Clones and the best part of Lego Star Wars, namely, Dex’s Diner. However, it isn’t the Diner, but an annoying framing narrative featuring an obvious audience insert named Emil that makes this story less than palatable. Emil has an encyclopedic knowledge of stories set in the Star Wars universe and coincidentally has relatives, who have brushed into big shots like Obi Wan Kenobi and a petty thief who looks like the lipstick wearing alien lounge singer in Jabba’s Palace. He doesn’t have a personality. Emil is just a twerpish version of a late night movie presenter and definitely isn’t sci-fi Svengoolie or Elvira. The story itself is fine enough and shows off Obi Wan Kenobi’s wit, charm (I could hear Ewan McGregor’s voice in my head while reading.), and ability to improvise and not use his lightsaber to solve problems. The tacked on moral at the end is a little much and makes it feel like Book of Virtues or one of those bargain basement cartoons they used to show on public television.

I’m really half and half with Star Wars Adventures #1 thanks to the backup story being underwhelming. However, the Rey story had  fun art from Derek Charm, and Cavan Scott writes her like the wide eyed, self sufficient hero that I loved from The Force Awakens. It’s the continuing story so I’ll continue to check out this new comic.

Rating: 5 (out of 7)- The main story of Star Wars Adventures featuring Rey is all sorts of fun, but the backup has one of the most annoying additions to the Star Wars universe.