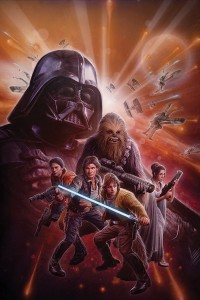 This was a solid installment by Brian Wood and co. This arc has been a little slow for me but this issue made up for the past few. This is the end of the arc taking place on Arrochar where Leia is betrothed to the prince in exchange for a new home for the Rebellion. The Imperials are not too far behind them and this issue is an all-out battle. The Imperial wedding crashers think they have the Rebels right where they want them and our heroes of the Rebellion might have a few tricks up their sleeves to stave off destruction of the planet, and ultimately the Rebellion itself. It was great to see our heroes shine and have some triumphant moments.

The Darth Vader scenes really made me feel bad for him because the Emperor really treats him like crap. Ultimately, we know how everything plays out in the end but it is hard not to feel for the guy. We know that in Luke is eventually able to find the good in him and the infamous scene when where Vader tosses Palpatine over the railing to his death in Episode VI that much more gratifying because of all he had to suffer while working under the Emperor.

The artwork on the issue is pretty good. I enjoyed it for the most part; there are some really cool scenes in this issue. My favorite artist that has been on this book has been Carlos D’Anda but a little variety is nice sometimes, especially with such iconic characters. It’s a shame this series is coming to an end soon (issue 20, I believe.) It’s been nice to go on adventures with the original gang and explore what happened between the end of Episode IV and the beginning of Episode V.

Rating: 5 (Out of 7) – Great ending to an okay arc. Brian Wood is doing a great job with these characters making it an enjoyable read every month.