When Bunn and Crook took a short break after the cliffhanger ending of #24, I knew the post-hiatus issues had potential. But the last 3 books have been a thrilling set-up to a showdown that has been brewing nearly the entire run. Kammi, Emmy’s evil twin, has been revived and is on a warpath that threatens all of Harrow County – especially the people that Emmy holds most dear. With Emmy racing to save her father, her best friend (and moderately powerful witch in her own right), Bernice, is on her own to defend Mason Hallow from a reanimated sorceress out for vengeance. 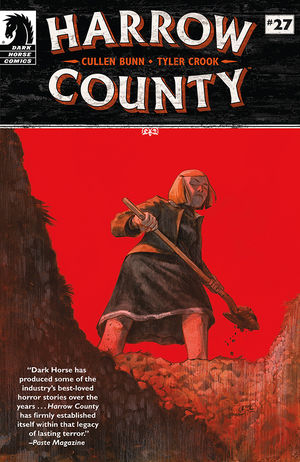 #27 opens with a flashback of Lovey training Bernice, a scene I earnestly welcomed as I felt we did not get to see enough of the teen learning witchcraft. Hesitant to use her new skills to take a life, Lovey ominously warns Bernice that, “… if the day dawns when you find yourself feuding with a witch you ain’t gonna have no choice in the matter.” The scene then jumps to Bernice, armed to the teeth with supernatural weaponry facing off against Kammi and her gang of freshly minted monster men. Having just battled a reluctant Emmy, Bernice may seem outclassed by Kammi, but the budding witch has more than a few tricks up her sleeve.

This is one of the most gruesome issues yet, with both girls using their magic to bloody effect. Crook keeps the red flowing in a way that both evokes searing pain and aesthetic beauty. It just wouldn’t be a “Harrow County” issue if some ugly things weren’t made pretty with Crook’s watercolor brush. Even the sickening sound effects are given a graphic pizzazz. As the story jumps between Emmy and Bernice, past and present, shocking violence and wrenching emotion, Crook handles all the moods appropriately, giving each panel the touch it needs.

Review 6 (out of 7) – A riveting warm-up to next issue’s Teen Witch Throw-Down. Emotionally charged and blood-splattered – I can’t wait for #28.