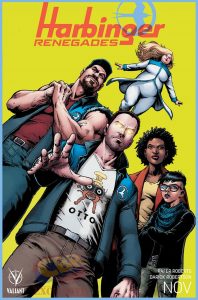 With the help of a handy diagram-style introduction page from artists Raul Allen and Patricia Martin, Harbinger Renegades #1 throws readers old and new into a world filled with unrest, state surveillance, and superpowered people known as psiot. In the last Harbinger series, a team called the Renegades defeated the evil Toyo Harada, but not after a list of all known psiots was leaked on the Internet for everyone to see. In response to this information, a group called Consortium led by a charismatic, yet sociopathic young man aptly named En Fuego is trying (and failing) to activate potential psiots, who mostly end up dead. But writer Rafer Roberts and artists Juan Jose Ryp and Darick Robertson with colorists Frankie D’Armata and Diego Rodriguez mainly focus on the rise of a new Renegades team led by Faith and her hacker buddy @X. This new group of psiots is pretty diverse and have well-developed personalities, but they have some major growing pains starting out.

Getting the talents of Darick Robertson, who drew and co-created  modern classics like Transmetropolitan and The Boys ,is a true coupe for Valiant Entertainment. Robertson’s art style (especially his anatomy) is photorealistic without being stiff thanks to his attention to detail and expressiveness. Each major character introduced in the comic has their own sense of style and facial tics from retired lesbian superhero Kris Hathaway’s undercut and piercings to 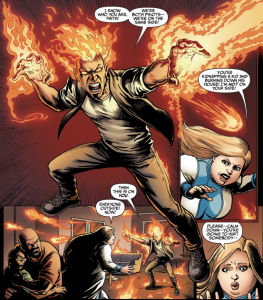 Faith’s beaming face and iconic blue and white costume and the sheer otherworldly nature of Peter Stanchek, who can activate psiot’s powers and is a bit of drug addict. His small appearances takes the comic to a more ethereal place thanks to the shining colors of Rodriguez, and Roberts getting out of the way to let Robertson draw this divine, yet highly flawed figure.

Roberts and Robertson are at their peak level when characters get into conflict with each other, especially when Faith and Jay Tucker, find shelter at Kris and her girlfriend’s house after Jay’s house is attacked by En Fuego and Consortium. Jay is a potential psiot and the viewpoint character for readers, who is trying to get into a good college, but can’t help wondering about his powers. And it’s his Internet searches that get both the government and the Consortium on his trail and lead to his house exploding in the big action movie scene midway through the issue. But Harbinger Renegades isn’t all explosions and superhero action as Roberts gets to the heart of different characters’ motivations.

Faith is a straight up hero with practical side, who wants some help from a team in fighting bad guys because her ex-boyfriend Torque is too busy signing autographs and appearing in reality TV shows. Kris wants to lay low with a normal job and not get in trouble any more. Jay is the wild card with his powers not yet revealed. (Maybe, it’s connected to the slick, gadget filled cold open, but I’m not well-versed enough in Valiant lore to judge.) However, he wants to be part of something bigger, was a fan of the original Renegades, and wants to bring them back even if that is a bad idea. All the differing viewpoints lead to some volatile conflict, and boy, is Robertson great at drawing pissed off characters. The new Renegades team is idealism, realism, and pragmatism all stirred up into some kind of shared universe superhero gumbo as they can’t get organized enough on their own to stop Consortium from exploiting young psiots all over the U.S.

With memorable art and powerful colors from Darick Robertson and Diego Rodriguez that meld well with the powerful conflict plotted out by Rafer Roberts, Harbinger Renegade #1 is the superhero team book for young people trying to survive in Trump’s America. The comic begins on a down note, and there are no big epiphanies or traditional “Avengers Assemble” type moments except for when Faith swoops in and grabs Jay ,which ends up being the beginning of a hasty retreat. Kris, Jay, and Faith’s mentors and adult figures have failed them, and they must try to make sense of world filled with surveillance on “subversive” activities and people like the Consortium, who just want to exploit them and use them as lab rats in a selfish quest for power and glory.