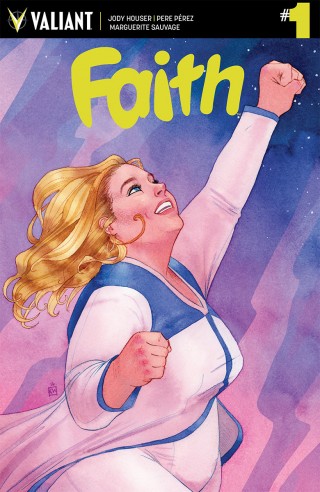 In Faith #1, writer Jody Houser, artist Pere Perez, and colorist Andrew Dalhouse construct a hero that will appeal to fangirls and fanboys everywhere. This first issue focuses a lot on Faith’s personal life as she struggles to balance making new friends in L.A., her budding relationship with Obadiah Archer (The co-star of the hilarious Valiant comic Archer and Armstrong.), and being an effective superhero. However, Houser throws an excellent right hook of a cliffhanger at the end of the issue as she starts to explore the theme of the shallowness of Hollywood. Throw in some guest art from comics legend Colleen Doran, who retells Faith’s origin in a classically beautiful superhero style, and Marguerite Sauvage, who draws Faith’s dream sequences, and it’s worth picking up for both fans of the Faith miniseries and people in general who like their superheroes, who act and look like actual humans beings to go with the punching, flying, and quips.

The part of Faith that draws me to both her character and her series is how she uses pop culture to cope with struggles in her life and the world around her. For example, she references the Star Wars prequels after something bad or frustrating happens in her life like her editor capitalizing on her superhero identity by having her write a column as Faith, or when her potential boyfriend Archer is a little perturbed that all she will talk about is having a photo shoot with her favorite actor Chris Chriswell.  (Think all the white Chrises who have played Marvel superheroes rolled into one juicy package with the help of Marguerite Sauvage’s pencils.)

After the origin sequence, Faith #1 opens with Faith (in her civilian identity of Summer Smith. ) playing a copyright friendly version of Dungeons and Dragons with some co-workers and their friends and having a good time. But this isn’t a geek reference for the sake of “Oh, Faith/Summer’s a nerd, she plays DnD”, but a valuable insight into her character backed up by Houser’s narrative captions and Perez’s art. The roleplaying game is a metaphor for her playing various parts in her life like being a superhero while still trying to be a normal woman with a job, friends, and social life. Even though she’s a solo hero and her last time as part of team didn’t go very well in the comic Harbinger  , Faith still yearns for that kind of superhero team-up cameraderie. Perez shows this in his artwork by using a more stylized inking technique to show her memories of being on a superhero team before cutting to the stark, more realistic world of game night. There is also the relatable of awkwardness of making friends in a new city as Faith’s exit from game night isn’t the most cordial because she is paranoid that her co-worker Jay is going to accidentally tell people her secret identity. She wants to have a good relationship with him, but also wants to be a good superhero too, and these end up butting heads.

This awkwardness extends from the civilian identity scenes to Faith’s superheroing as well as Perez demonstrates Faith’s flight and companion field abilities with big superhero poses and powerful triangular panels as she makes lighthearted banter and apprehends a robber. But then she falls to Earth and doesn’t really help stop crime all that much as there’s no evidence that the perp she confronted was committing a crime. (Except towards fashion with his unoriginal henchman get-up.) It’s honestly what happens in real life citizen’s arrests with an extra touch of ray guns and force fields. And her patrol ends with a slump into bed, a nightmare about her secret identity getting exposed, and her missing her alarm with an obscure Tolkien reference as a curse that made me laugh out loud. I almost missed my alarm this morning so it was nice to see a superhero share common interests and struggle with me. Houser also makes Faith’s editor, Mimi, a little more nuanced than a (sometimes) one dimensional J. Jonah Jameson type as she understands that her double life as a superhero means she might be late to work on occasion. However, she uses that double life to drum up more traffic and page views for her website and is a pragmatist with a touch of altruism.  This manipulative move is sadly relatable to my personal experience of writing  in a world where pop culture sites are going under or not able to pay their writers.

Faith #1 is about a superhero who is both competent and vastly afraid, who uses pop culture to deal with the crazy world around her as well as make new friends, and is quite witty on occasion. Writer Jody Houser and artist Pere Perez never make her weight a punchline and show that people of all shapes and sizes can strive to be heroes. Perez also hits that nice sweet spot between the surreal cartooning of Sauvage’s fantasy sequences and photorealism in his art while colorist Andrew Dalhouse uses blues and reds to show Faith/Summer’s bubbly personality even in sterile office environments.

Faith #1 focuses on its protagonist’s personal life as much as her superheroic exploits and gives her relatable struggles and problems. It has bright colors, a shocking cliffhanger, and some great pop culture references too for the geek in you.