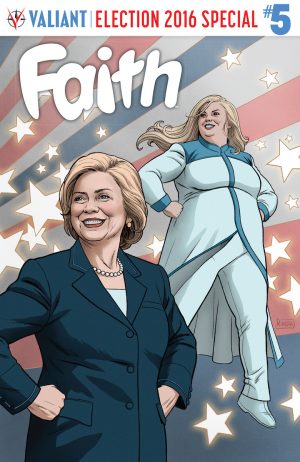 Just in time for Election Day, Faith #5 turns in a trio of touching female superhero stories featuring guest writing from the legendary Louise Simonson (Power Pack, X-Factor) and Rafer Roberts (Harbinger) and guest art from Meghan Hetrick (Red Thorn) and Colleen Doran (A Distant Soil, Sandman). The first story is written by main series Jody Houser and is the one that will be continued in future series as Faith investigates several children in L.A. falling comatose as an effect of teen actor Zoe Hines going all Dark Phoenix with the help of a cat familiar. The second stories are one-off’s featuring Faith stopping an attack on Democratic presidential candidate Hillary Clinton as she makes a speech in L.A. Memorial Coliseum, and a “day in the life” type of story with Faith taking down gun runners.

The series Faith has been an examination of geek culture and fandom through the lens of the superhero genre and its tropes, and in issue 5, Houser and Hetrick turn their focus to the harassment of women via the Internet. This plot seems ripped from the headlines as Zoe is one of many female celebrities, who have gotten private photos leaked by a hacker. The leak got her Glee-like TV shoe cancelled and hurt her acting so her rage and desire for revenge is perfect fodder for Project Rising Spirit, an evil superpowered organization as Houser expertly connects Valiant Universe continuity and real world issues. Between her hunt for Zoe, Faith also makes some observations about online harassment, and Houser 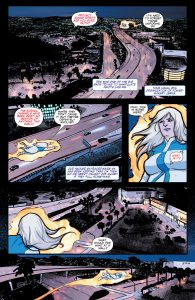 continues to show her using geek culture to deal with problems around her with a well-timed reference to WicDiv #13. This issue featured one of the gods, Tara, dealing with Internet and real life harassment from men, and I definitely agree the world would be a better place if everyone read that comic.

Unlike Perez, who is a solid superhero artist, but lacks variety in his characters’ facial features, (See the similarities between Faith and Secretary Clinton’s face in the second story.) Hetrick switches things up in that department with a looser, angular art style. The addition of angles enhances both Zoe’s ability to shoot tendrils out of herself, and Faith’s forcefield abilities giving their superpowers a kind of yin and yang effect. Andrew Dalhouse also suppresses his usual bright superhero palette to go darker when Project Rising Spirit shows up. There’s lots of black vans, sunglasses, and outfits involved to go with the black gutters and Hetrick’s overall seedier take on L.A. at night.

The second story from Simonson and Perez is part voting PSA/part superhero adventure/part commentary on the intersection between entertainment and information in journalism as Faith’s editor wants her to cover a Hillary Clinton rally as her superhero identity, not journalist Summer Smith. The presence of Clinton is just to inject some real world relevance and also give Faith her own hero to look up to. Simonson captures Faith’s earnest good and nerdiness as she quotes the famous Spider-Man line “With great power comes great responsibility” after Clinton thanks her for rescuing her as well as some narrative captions about how voting is one thing that unites society; a billionaire, college student, and superhero each get one vote. 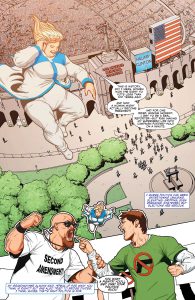 And between the soul searching and voting stuff, Simonson and Perez find some time to sneak in some action as Faith squares off against Squall, a psiot with wind powers, who robs banks when there are high security events going on in town. It’s a clever idea for a one-off villain. The fight scenes are an explosion of speed lines and work out nicely on the page as Faith stretches her forcefield powers to stop a helicopter from dropping on the Clinton rally. And despite the facial similarities, Perez nails the overwhelming giddiness that Faith feels when she gets to chat with Hillary Clinton going full out cartoonist.

The third story from Roberts and Doran is about Faith constantly stopping bad guys with the help of her tech support/hacker friend “@X” as she seems to be the only psiot in Los Angeles available to fight crime. The story takes a turn for the heartwarming when Faith rescues a young psiot girl, who is being used by her uncle to help rob an arms shipment. Doran uses a grid layout to make the action and emotional beats clear and easy to follow as Faith goes from grabbing guns with her force fields to giving this young girl a hug. She started the night stressed out from non-stop patrolling plus a day job, but helping kids like this

Honestly, Faith #5 is worth picking up for Marguerite Sauvage’s double page spread of Faith imagining herself as a Sailor Scout when she sees the (evil) talking cat at the mall that is manipulating Zoe Hines. It is a showcase of how important and inspirational superheroes are to people everywhere as in two separate stories, Faith beams with joy as two young girls look up to her and combines the real world, pop culture, and the superhero genre into one pleasing comic book mixture. It is also nice to see a talented group of female comics creators from different eras team up and do their own takes on one of the best female superheroes and hopefully inspire yet another generation of female comic book fans and creators.