Birthright is, as of its first issue, the intersection of a Conan-meets-Peter Pan fantasy adventure and a suburban family drama. I think. It’s the best description I can come up with, and I may have to revise it in the future because Birthright is one of those stories that, like its protagonists, begin as something ordinary and turn out to be anything but. I can honestly say after reading its debut that I have absolutely no idea what’s coming next, but I’m sure it will be a bloody, good time finding out. 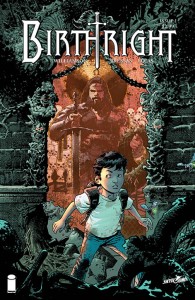 Where the story starts seems almost intentionally clichéd: a father and son playing catch in the park. The father’s cell phone starts to ring. He gives the ball an extra long throw and picks up, answering “How ya doing, sexy?” when his son is out of earshot… it’s his wife calling about young Mikey’s surprise birthday party. Seriously. This guy doesn’t even have the decency to be calling a mistress. It’s a through-and-through perfect, normal family. When Mikey doesn’t return, Dad goes looking for his son in the suddenly ominous woods. All he finds is the ball.

What follows is the good ol’ time-rolling-forward-montage-as-everything-goes-to-pot routine. The search drags on fruitlessly, the father is accused of murdering Mikey for no reason at all, his wife leaves him (of course), he becomes a down-and-out drunk (of course), and Mikey’s older brother Brennan starts getting into fistfights at school (OF COURSE). Right as we begin to feel like we tuned into a daytime soap opera, the story veers off course when Mikey miraculously returns. However, he’s no longer a young, innocent boy, but a grown man somewhat resembling Kull the Conqueror.

At this point, the narrative breaks off into two separate streams. The first follows a young Mikey being rescued from the magical (and very dangerous) forest of Terrenos by angelic warrior-children, marking the beginning of his hero’s journey. The second unfolds in a police interrogation room, as Kull-Mikey gives exposition about his exploits, the things that young Mikey has yet to do; chiefly, defeating the evil God King Lore, and finally returning home to protect his family from the remaining agents of Lore who would destroy them. A typical child on magical adventure tale told alongside a typical Conan-esque sword and sorcery. That is until Kull-Mikey is left alone, and it is revealed that our “hero” isn’t quite what he appears; and his younger self may be bound for a collision course with tragedy.

This issue works because it repeatedly sets up something so predictable, only to whip us in a completely different direction. It begins where most stories choose to end with the return of the hero, and it keeps turning from there. I expect the two-stream narrative to continue into later issues, and I hope they become an integral part of the story. The dual-worlds it establishes are in many ways familiar, but so full of possibilities and intrigue that I can’t help but be excited for the future. How do you cross from one world to the other? Can our Earth possibly withstand an onslaught from Terrenos? Is Kull-Mikey a hero, a villain, or both? Can our dysfunctional, suburban family somehow save young-Mikey from the fate he seems destined to suffer? How is it all going to end? I have no clue, but I’m expecting good things. Maybe even great.

As for the art style… a more knowledgeable soul might be able to discuss the technique itself – the line work, the use of color and shadow, etc. – or at least give something beyond “it looks good” (which it does). I, unfortunately, cannot. However, there is one thing I have noticed: the framing of the panels. Every panel is a rectangle; most of them with identical dimensions. In a medium that has become increasingly abhorrent of panels that don’t bleed together or stack atop each other, or characters that stay INSIDE the panels, or even coloring within the lines, this kind of rigid framing is unusual. It’s almost cinematic; and very detailed as well. Whereas more and more comics are adopting a minimalist approach, Birthright fills every frame with detail, from the foreground to the background. It forms a sweeping landscape that is perfect for an epic. They want to soak you in the world. No part of the world is treated as boring; whether it’s the walls, the foliage, or the sky. Every extra touch makes the world that much richer and more vibrant – the perfect place to roam and explore. I can’t wait to get started. Talley-ho.