The interaction between Rick and Neegan goes exactly as you would expect. There is a lot of unfinished business between these two and Rick may be delaying the inevitable, but I think the resolution of Neegan’s arc will be a deadly one; I’m just not sure for whom. Andrea may be one of my favorite characters from the comic book and in this issue I really loved her scene, no matter how quick it was. The way she interacts with and cares for Carl like a true mother. These guys have been so much together that they really are family in the truest sense, however unconventional it may be. I also love the trust and respect displayed between Rick and Andrea. It’s nice to see them both in a “stable” relationship where they both treat other as equals.

While Rick and Carl are travelling on the road we really 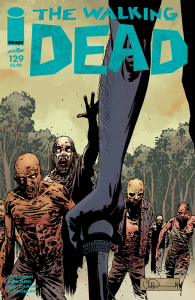 get to see a wider scope of all the good Rick has done and how much “safer” it is out there beyond the wall. Everything is so calculated and precise, and to be honest, effective. Rick and Carl travel by horse and go quite some time along the trade route without seeing anyone but the road patrolmen. I would say this is progress, and it’s nice to finally see the group effectively and systematically dealing with walkers. I really liked seeing Rick fully take on the leader role as seen in a confrontation he has towards the end of the issue. He is in control and everyone knows it. And I feel that is where he belongs. If anyone can protect you during the zombie apocalypse and reestablish some sort of civilization, it’s him. The only question is how long will it last this time?

The artwork in this issue is awesome as always. I really dig the work on this book and I think the art gets better every issue. Charlie Adlard has been on this book for well over 100 issues and he has made these characters his own. If you flip through some older issues, it truly is evident how much he has grown as an artist on this book. He does a great job with every single one of the characters and his zombies are always great. Some of his zombie scenes are just as brutal and nerve-wracking as in the television show. I’ll admit it was strange seeing some of the new character designs after the book jumped ahead but they are finally starting to grow on me, especially Rick with his artificial limb and the cane for his limp.

After the ending to last issue I was not surprised by the ending for this one, although I didn’t expect it so soon. The newest band of survivors that Rick took in want to find the dirty little secret that he and the community are hiding. I think this will lead to an exciting confrontation within the next few issues and I do not expect it to go well.

Rating: 7 (Out of 7) – Another stellar installment in our favorite zombie apocalypse story, brought to you by Robert Kirkman and Charlie Adlard.