Review of Dawn of The Planet of the Apes

Dawn of the Planet of the Apes has one simple question at its core: “Are apes better than the humans they sought refuge from?” By the end of the film you will come away knowing that similar problems exist in all forms of civilization. From the opening segment, that conclusion is pretty obvious, but the movie still takes you on a tense journey full of twists and turns that leads to an invaluable answer for all parties. 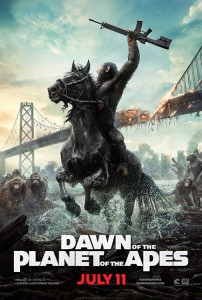 Dawn of the Planet of the Apes begins with a look at what has happened in the decade following the events of the previous film, Rise of the Planet of the Apes. During the ten years that have passed, the “Simian flu” has wiped out a great portion of the human population. So much so that the apes begin to wonder if any humans are even left since it has been “two winters” since they last made contact with any of the humans. In that time though, apes have been able to design their own civilization. They have children, they teach language and history, and they even have positions of power. At the head of it all is Caesar, the ape who had freed all his brethren in the last film. The apes’ peace is disrupted when they make contact with a mini-expedition of humans who stumble upon their jungle territory while trying to make their way to a dam generator. In fear, one of the humans accidentally shoots an ape, and this would be the fuse for the majority of the plot. The humans and apes attempt to come to a working understanding, which surprising no one, doesn’t actually work out. Before we tackle that though, I wanted to take the chance to pick apart one of the issues I had with the film. Carver, the human character who shoots the ape, is one of those characters you see in all of these movies, the character who really just seems angry and upset at the opposition for the sake of the plot. From the moment he is on-screen, you know he’ll do something stupid that would jeopardize any good progress the sides are making. And lo and behold, that’s exactly what happens here. His justification is a bit weak as well, since the “simian flu” was a human construct, but he blames the apes for killing those near to him.Though to help their case, the director also has an ape with a similar problem on the other side of the dispute. And this is where the core message and best part of the film comes from, seeing the apes evolve to become more like humans. Apes as Caesar note aren’t better than humans after all. They have rage, guilt, anger and even ambitions of their own. They can be just as cunning and cut-throat to get to the top of the pyramid. And just as violent. 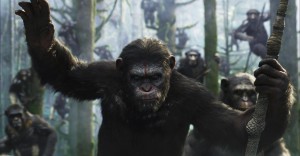 If you’ve seen the trailers or media related to the film, you no doubt know  the apes learn to ride horses. And adapt to their environment. At the start of the film, they are pretty primitive, hunting in packs and with spears, but after breaking into the human settlement camp, they begin to wield more modern weapons. This is when they become truly dangerous, not just to the remaining humans, but to themselves.

I focus on the ape side of the story because I really didn’t find the human half nearly as compelling. They’re the crux of the forward momentum for the plot, but feel like such accessories to the story until they are needed at the end. I don’t know how they could have been made more interesting, but I just didn’t care for their quest for literal power.

That’s not to say there aren’t strong performances, just that they were really one-dimensional characters, and some of them didn’t serve much of a purpose. 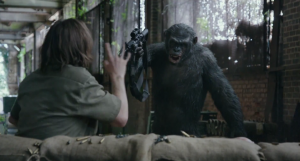 As in the first film, the real star of this film is the ape performances. Andy Serkis once again delivers as Caesar, who has a much more complex role in this film. Being a leader, a father, a husband, a warrior, but still with a gentle heart to some of the humans. Toby Kebbell does a great job as Koba, the ape with a much troubled and painful past with humans. And my personal favorite is Karin Konoval’s Maurice, who brings an interesting warmth to the world, and creates a real human connection with Caesar and some of the humans on display.

Unlike humans, in this and many movies this summer, the apes aren’t limited in their movement so we get some of the most vicious and brutal fight scenes in cinema this blockbuster season. While it doesn’t reach the highs of something like The Raid 2, it really does make an impact. With the finale being a true test, of not only brute force, but the place of the principal characters in and below the fight.

Review 6 (out of 7): At the end of the day, Dawn of the Planet of the Apes is held back by the human side of the story. While they don’t give weak performances, their role seems so plot-centric that it’s almost wasted on the talented bunch. That said, you’ll still find a compelling story with some fun action sprinkled throughout.