WrestleMania is in the air once more! As we did last year, we’re going to carve out a little chunk of March to talk about the Grand-Daddy of them all. While details are still being finalized in our head, expect more than just the event itself to be talked about this year.

To kick off our road to WrestleMania this year, we’re going to look back at 7 Superstars who have bought it all when it comes to WrestleMania. This list will account for their match quality, their stature on the card and their memorable moments. Some wrestlers as you will see in a bit were left off for leaning more one way than another, but trust us there were many other Superstars that we considered. 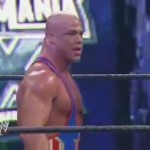 7) Kurt Angle– Kurt Angle doesn’t really have a “WrestleMania” moment as the kids like to call it, but I would be hard-press to argue that he wasn’t in the best or one of the best matches of the night for every WrestleMania he was a part of. Whether in the 2 Falls Eurocontinental matchup at WrestleMania 2000 or stealing the show with Shawn Michaels at WrestleMania 21, Kurt always bought his A-game at the big show. 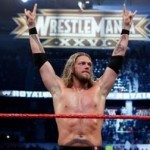 6) Edge– The Rated R Superstar has been in 4 World Title matches at WrestleMania, but his “WrestleMania moment” came over a decade ago in a Tag Team match. As Jeff Hardy swung desperately off of the tag team titles suspended in mid-air, Edge would spear him from a nearby ladder. A moment that remains etched in the mind of many wrestling fans around the world. While that was his moment, he has also been able to put on some stellar bouts in his resume including his amazing match against the Undertaker at WrestleMania 24. Not everything has been golden for the Rated-R Superstar though as he also had a feud against Booker T at WrestleMania 18 over a Japanese shampoo commercial. True story! 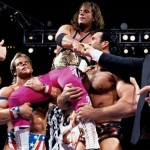 5) Bret “The Hitman” Hart- For the middle half of WrestleMania’s history, there was always one man you could count on to put on a hell of a show for you. Even with the general stench around WrestleMania 13, people still talk about his fantastic “I Quit” match vs Stone Cold Steve Austin. But that wasn’t his only star-making performance either as a year earlier, he went an entire hour against Shawn Michaels in the WWF’s first ever Iron Man match. Beyond that, he had fantastic bouts for the Intercontinental title against Roddy Piper at WrestleMania 8 and righted a wrong at WrestleMania X.. after performing twice in the night. We’re going to ignore his last WrestleMania performance for the sake of his legacy! 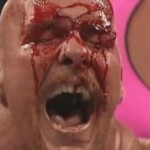 4) “Stone Cold” Steve Austin– Originally, I wasn’t going to include him on the list. Austin’s track record at WrestleMania isn’t flawless. His match against Savio Vega at WrestleMania 12 is better left off the history book, and while the match was decent, his match with Scott Hall just didn’t feel all that special on the WrestleMania X8. But then you look at his larger body of work, and it’s hard to imagine leaving him off the list. We already mentioned his fantastic performance against Bret Hart at WrestleMania 13. His star-making moment with Shawn Michaels at WrestleMania 14 and his trilogy with the Rock at WrestleMania 15, 17 and 19. More so than any other WrestleMania feud, this told a story that was compelling and logical over 5 years. Finally, he has been a pretty huge part of WrestleMania even in retirement.

2) The Undertaker– How can you have a Greatest Performers of WrestleMania list without including the man who has been able to go undefeated at the event… 20 times! While a decent portion of his matches are only decent to good, in the past decade or so he has really stepped up his output. Including classics against HBK at WrestleMania 25 and 26, against Triple H three times, the Nature Boy Ric Flair, Randy Orton, Edge and an amazing performance out of Batista at WrestleMania 23.

1) “The Heartbreak Kid” Shawn Michaels– Is there any doubt in your mind that Mr. WrestleMania deserves to be on the top of this list? I have named 6 other Superstars on this list, he has been in the ring with 5 of them at the grandest-stage of them all. In his nearly 30 year career, it would be hard to imagine a WrestleMania card he was on and didn’t have the best match of the night. WrestleMania X’s ladder match, 12’s Iron Man Match, 19 vs Jericho, 20 in a stellar 3-way main event, 21 vs Angle, hell he even got an amazing performance out of Mr. McMahon at WrestleMania 22. And that’s his early work! Recently, he feuded with John Cena at 23, retired the legendary Ric Flair at WrestleMania 24 and ended his run with two fantastic, top of the line matches with the Undertaker at WrestleMania 25 and 26. He may have dubbed himself Mr. WrestleMania, but over the years he has truly earned that moniker.