Talk of the Town: Arrow Season 5

First up, a very special congratulations to Arrow. If our math is right (and it could be off), this is only the 2nd superhero show to make it to a season 5. The other being Smallville.

Where We Are: Much like The Flash, Arrow’s 4th season kind of wrapped up with a neat little bow.

After Darhk attempts to launch nukes to take out Star City and most of the world, Oliver and his team are able to thwart that plan. Along the way, due to an inspiring speech, Oliver is able to depower Darhk enough to fight him in an one-on-one bout wherein he kills Darhk and puts an idea to that dark magic. 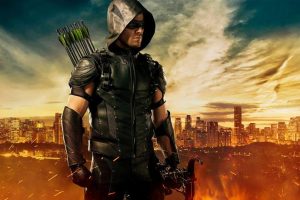 Though the team celebrates victory, everyone decides its time to explore life outside of Team Arrow with Diggle, Thea and Captain Lance all deciding to go their separate ways. Leaving Oliver and Felicity as the two members left standing. Also due to several incidents, Oliver Queen is sworn in as mayor of Star City.

Along their battle with Darhk though, allies fell and dealt with their own personal hardships. During a rescue mission, Laurel Lance aka The Black Canary was murdered. Diggle was forced to take the life of his brother. And Thea and Malcolm’s relationship became even more strained when she realized he had drugged her and taken her to Darhk’s underground city. Felicity, who gained control of Palmer Tech from Ray, lost it due to her absences in the office.

Not everything was bad for Team Arrow though. As Oliver was re-acquainted with old allies in John Constantine and the heroine known as Vixen. One of Palmer Tech’s employee, Curtis Holt, became a close ally of Felicity before discovering Oliver’s secret as the Green Arrow and even Roy Harper stopped in for a visit in Star City.

What to Expect: Season 5 seems like a soft reboot for the series. With Team Arrow disbanded at the end of season 4, it seems like Oliver is going to recruit and train a new team of heroes. All amateur vigilantes who were inspired in some fashion by the Green Arrow and Black Canary. It will be interesting seeing Oliver take on a mentor role by design. While he helped trained Roy, he was reluctant for Laurel to get in on the action and Thea was trained by her father. Diggle came into the field with training, and no one else really fought on the team.

As for the rest of Team Arrow, it isn’t quite clear what Thea and Lance are up to. We can see that Thea is still in contact with her brother and still sports her Speedy costume, but doesn’t appear to be part of the new Team Arrow. Lance isn’t shown at all during the trailers. Diggle seems to have joined his wife in working with ARGUS. Felicity remains support for Oliver, both technical and morally, and it looks like Curtis is joining the vigilante group.

We see that Oliver will make it to Russia in the flashback, and in exciting bit of casting we know that Dolph Lundgren will be playing the big bad during these flashback sequences.

As for the present-day big bad, it seems like the creative team wants to go back to season 1/2 and keeping that a surprise, but that doesn’t mean we don’t know a few of the threats that Oliver will be facing. The biggest one seems to be the live-action debut of Prometheus. A villain who has been able to go toe-to-toe with the entire Justice League. There is also word that the crew is looking to cast a person similar to Oliver as a potential big-bad.

Arrow has had some rough patches over the past two seasons, but it seems like they are trying to boil the show down to its bare essentials, and hopefully it means a focus on what made the show great in the first place.