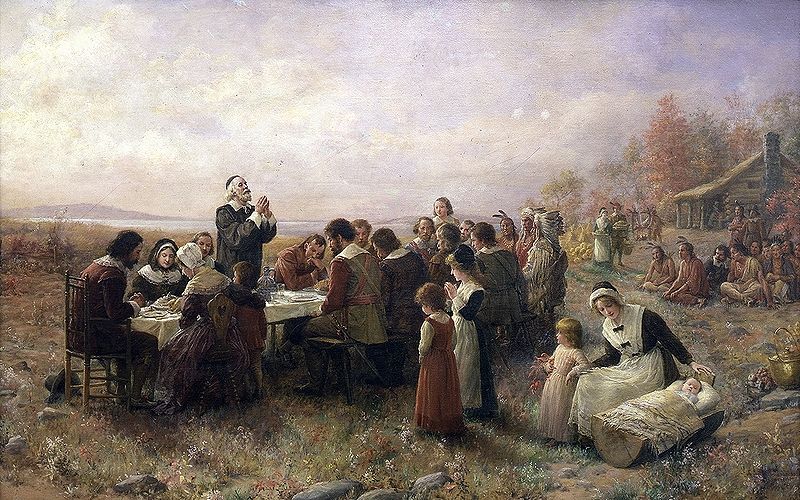 “Why isn’t Thanksgiving used as a theme/backdrop for more products in entertainment?”

I’d argue that certain seasonal settings lend themselves better to film, television, and movie narratives. For example, Christmas is a prominent setting because of its dynamism. On the surface, Christmas appears to be a Christian holiday purely to commemorate the birth of Jesus Christ. That being said, there’s a strongly commercial aspect to the holiday which is completely removed from religion. Jack Frost, Santa Claus, Rudolph the Red-nosed Reindeer, presents, Christmas trees, and Eggnog lattes all feel synonymous with this cold time of year. I could make a movie about Santa Claus getting into a fist-fight with Jack Frost while Rudolph slams Irish Eggnogs, and you would understand it as a Christmas film. Sadly, Thanksgiving doesn’t have that much depth to it.

Thanksgiving, as it is celebrated in America, commemorates a feast shared between the Pilgrims and Native Americans after the first harvest in the New World in 1621. It’s also meant to celebrate God’s blessings for the land’s bounty and America’s military might. It’s definitely an important holiday, however, it doesn’t mean much more today outside of eating with family and maybe giving thanks for all of the many ways in which your life doesn’t suck. With that in mind, it doesn’t really bear the same iconic status as other holidays (possibly because it wasn’t originally based on a Pagan holiday, unlike Christmas, Easter, and Halloween), and making media that echoes the themes of the season can be challenging because those themes happen to be fairly shallow.

There are, however, a few pieces of media (namely, movies) which take full advantage of Thanksgiving as a narrative setting — albeit unconventionally. One of my favourites happens to be a sequence in Addams Family Values. In the scene, Wednesday and Pugsley act in a play about the first Thanksgiving at their summer camp. What begins as a corny, ho-hum, and deceitful view of the American’s role in Native period life quickly becomes a hilarious uprising. Playing the part of a Native leader, Wednesday initiates a fiery riot against the white man for stealing their homes, raping their women, and pillaging their land. At this point in time (the early 90s), no other Hollywood film was willing to step into this socially-conscious theme, and it made the movie’s use of the holiday feel unique. Another good example is ThanksKilling (yes, you read that right). In ThanksKilling, a cursed turkey begins killing off college students slashers-style over the Thanksgiving break. It’s a terrible movie, but its use of giant birds is inspired and the film was smart enough to be a black comedy instead of a straight up horror film.

Overall, I’d like there to be more Thanksgiving-inspired media. It really is a setting that hasn’t been well exploited. That said, there isn’t much narrative fodder to take advantage of. You can either blame that on how we celebrate the holiday today or how ill-gotten the holiday is in the first place.