“What do you think of Nvidia’s new handheld? Will it succeed?”

For those not following the CES circuit, Nvidia has just unveiled a new handheld gaming system called “Project Shield” (I know, I know – it totally sounds right out of the Marvel universe). Project Shield is powered by the impressively powerful Tegra 4 mobile processor and can supposedly play console quality games while still being on the go. The processor is capable of high res video over HDMI to external displays and it includes advanced sound processing that Nvidia says rivals Beats by Dre laptops. According to the promotional material, the devices is capable of five to ten hours of play time or 24 hours of HD video playback. The screen is five inches and features a 720p Retinal multitouch display with crazy high pixel density. This new handheld also supposidly runs a “pure” version of Android, which I’ll assume is Jelly Bean, and includes both Gmail and the Google Play Store. In addition to supporting all Android-based games and TegraZone titles, this handheld apparently is capable of streaming games from a home Windows PC over Wi-Fi (can’t see that working well, but it’s an added feature). Of course, now the BIG question is whether it has what it takes to be disruptive in the marketplace.

The simple answer is “No.” 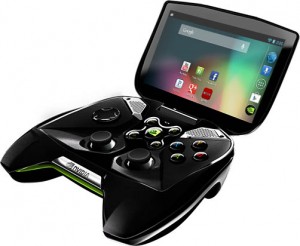 The first thing we need to ask ourselves before looking at its chances of survival in the wild is “what is this product’s value proposition?” This beast is hitting the market after five years worth of research and development, and yet it doesn’t want to revolutionise the way we game. Project Shield simply takes your mobile games and PC games and making them slightly more portable. To that extent, it will only play your Windows (no Linux or Mac) games if your graphics card is strong enough and you’re willing to stream the content. This, by extension, means that you’re fresh out of luck if you have a sluggish internet connection. Unfortunately, when you actually think about the logistics of this feature, it makes little sense. If I can only use my home’s Wi-Fi to stream my games, WHY AREN’T I JUST PLAYING THEM ON MY HOME PC? What, am I on the crapper or something? A portable console should be portable; if you can only play some games while at home, the handheld device can’t really “play computer games on the go.”

Realistically, if I WERE to take this device on the go I would only have access to TegraZone and Google Play games. For the uninitiated, TegraZone has just under 70 games for it, most of which overpriced and lacking in quality, and Google Play’s games aren’t exactly known for quality either. Not to mention the fact that you could simply get away with downloading those Google Play games directly to your phone, providing you’re on an Android device. No, things do not look great for Project Shield outside the home either.

It get’s worse even though, as Nvidia has failed to acknowledge it’s hefty competition. In a world where Nintendo’s strong IPs have lead its systems to crush every new market entrant (NGage, Game.com, Gizmondo, Game Gear, WonderSwan, Neo Geo, Lynx, etc.) save Sony’s PSP and it’s strong IPs, what does Nvidia have to sell systems? They don’t have a Mario, Link, Sonic, or Nathan Drake to hawk these things to kids, and kids really are where portable systems producers make the big bucks. Sure, adults buy portables, but any gaming statistician will tell you that it’s the 8 – 20 year old crowd that buys these things in hordes. What parent during the holiday season is going to look at buying what is essentially a tablet/controller/PC hybrid for their 9 year old over that of a Nintendo 3DS or even PS Vita. No, their competition is strong and well established. This bold product reveil demonstrates either lack of thought or really poor foresight on the part of Nvidia.

This unfortunately brings me to my final point about Nvidia’s Project Shield: It’s thinking backwards. The entire mobile and portable gaming market is trending towards hardware that allows you to be social with others, share content, stream video, and try new apps. This thing only allows you to use a tiny screen to play HD games. This obvious absence clearly demonstrates that Nvidia isn’t looking to the future, so much as trying to improve upon relics of the past.

However, if we were to ignore everything I’ve said up to this point about the idiocy of it’s streaming feature, the poor mobile gaming content, the failure of marketability to younger demographics, the obvious lack of well known IPs, the disregard of direct competition, and the unwillingness to be anything more than a straight-up gaming device, is it still a bad purchase?

Not only does it look ugly as sin and probably cost a fortune, but I doubt a single person can look at it’s features and comfortably say that they NEED the Project Shield in their lives. And really, that need is what usually sells electronic products. I see Nvidia’s Project Shield going the same route as Panasonic’s Jungle.