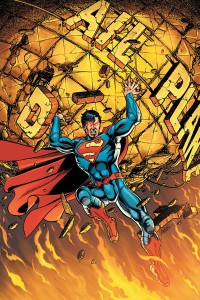 The original Daily Planet building is demolished in the wake of a buy out by Galaxy Communications, a multinational news organazation owned by the possibly (he is) corrupt Morgan Edge. Superman’s attempt to stop a pair of terrorists from blowing up Metropolis’ new Astrodome is rudely interrupted by a fire-breathing alien that could be from Krypton.

Superman #1 is a great standalone issue that sets up the new status quo, tells a fun old fashioned Superman story, and confronts the troubles of print media without being heavy handed.Â  Yes, the parallel between Morgan Edge and the News of the World scandal is obvious, but it’s logical and adds of a lot of dimension to the book that would otherwise be lacking in Superma vs Fire Monster comic. Frankly, Morgan Edge being Superman’s own Rupert Murdoch works for me and gives him distinction among Superman’s human villains.

Superman#1 is the first hard look at the NuSuperman after cameos in Justice League and Swamp Thing and I want to see for him. For fans of Action Comics you’ll be pleased to know that Superman is still a hard-ass but now he’s in a place where he’d quip with the bad guys a little bit before throwing them head first into a wall. Yes, he still has a way to go before he reached that calm/zen place he was in during Swamp Thing.

Perez expertly fits more story into the pages of Superman #1 than most of the other Number Ones (no decompression here folks, it’s all done in one). That said I do have two main quibbles with the script. One, the tie in to Stormwatch feels really random and arbitrary like Perez was told to “Tie them together” and didn’t put that much effort into it. Â Two, the narration boxes felt completely unnnecessary, like Perez was falling into the trap of Tell instead of Show. We finally see the purpose for the boxes at the end when it’s revealed to be Clark’s coverage of the story in the morning paper. I hope this gimmick doesn’t continue and Perez lets the artist do the work action wise.

Speaking of the art. Jesus Merino’s does a spectular job of bringing a classic feel to the book and making the new suit design pop. Everything is crisp, clean, and distinct. Though Jimmy does look oddly younger than his Action counterpart and eerily Bieber-esque. But I digress.

Accessibility: Anyone with a basic knowledge of Superman can jump into the book and find something to enjoy. The Stormwatch tie-in may be off putting but you’ll get over it by the end of the issue.

Live or Die scale: Live, there’s enough here for fans of the classic Superman and the NuSuperman to find common ground.

Recommendation: Buy, for the love of God man, buy this book!!