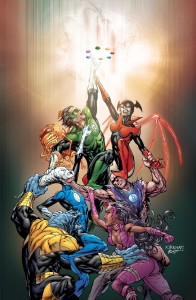 Wielding the most powerful weapon in the known universe isn’t always an easy task. And sometimes that pressure can get to you. Imagine being overwhelmed by the entire force of the emotional spectrum then. That’s what is hinted at in the first issue of Green Lantern: The New Guardians, but before that…

The story starts off with a brief flashback to how Kyle Raynor became a Green Lantern. While the book does a decent job of recapping the events, it really does a terrible time of placing the events in a proper chronology. We are shown Kyle given his power ring, and then just forward to the present day, but are never told (nor is it hinted at) how long between those two events we are missing. While I’m not one to really question continuity too often, when it is thrown in your face, it has to be addressed accordingly.

Anyhow, we flash forward to the modern day where Lanterns of the various emotional spectrum are having their ringsÂ decommissionedÂ at the worst possible teams. We are witness to some truly grueling deaths along the way. While we aren’t shown every color, we do see that it effects every Corps at the end of the issue. And we learn that when every ring decides to choose Kyle as the new ring-bearer. The various Corps aren’t happy with that, and we end with a rather colorful splash page!

Aside from the continuity gaffe at the beginning, I actually enjoyed this comic. Of all the Green Lantern books, I feel it is easily the most accessible and enjoyable to read to date. It seems to be focused on Kyle and a group of other Corp members, but you get a variety in that. And it didn’t rely on too much internal dialog boxes.

The art on the other hand is a bit hit or miss for me. I really didn’t like how human/non-powered Kyle was drawn. I get what the artist was going for, but that doesn’t necessarily mean I have to like it. The stuff with the various Corps members look better, but if you’ve read this site before I always think its an easy sell just because of the various constructs and color usage.

Survival Rating: Live- I think this book has a ton of potential, and Green Lantern is still one of DC’s more profitable line of books.

Recommendation: Read It– An enjoyable read from start to finish. The art varies depending on your taste, but I don’t feel it distracts from the overall package.