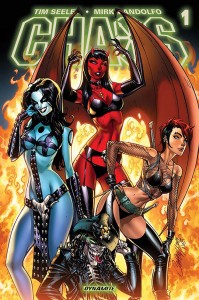 Remember the Bad Girl craze of the late 90’s? Those were good times. For a few years mainstream comics completely took a backseat as books like Lady Death, Vampirella, Cavewoman, Witchblade, and many more scantily clad clones clogged up the shelves with variant cover upon variant cover. It was a wonderful time for ludicrously large breasts and next to nothing costumes. Sadly, most of these comics were kind of crappy and eventually boobs and blood lost their appeal while real stories and heroes came raging back. But they were fun times nevertheless.

When Chaos! went bankrupt their characters were all up for grab. After the dust settled, Lady Death went to Avatar (and now Boundless) and the rest of the bunch went to Dynamite. There they hibernated until at last Evil Ernie was granted a new mini-series last year which I thought was pretty damn decent. And now we’re finally seeing what the rest of the band has been up to with Chaos! #1. Tim Seeley and company are bringing back Purgatori, Chastity, Evil Ernie, Smiley the Psychotic Button, Vex and the gang from The Omen and cramming them all into one six issue mini-series.

Basically, the setup is this: The Chosen (kids from The Omen) continue to wage their war against Purgatori while Chastity acts as her agent against them. They stumble upon Vex during a raid of Purgi’s lady shipments and she shows them a vision of Evil Ernie on the path to Megadeath, his goal to annihilate all life on earth to please Mistress Hel. So, not too far off from where we left everybody about ten years ago.

It’s a quick and succinct setup and very little back story is given for any of the characters involved, which I’m going to take as an assumption that this book will be picked up mostly by fans of the original books. The most notable problem with this series is the lack of Lady Death and her apparent replacement Mistress Hel. Right now we know very little about her, her location, what her motivations are or her connection with Ernest. But I’m going to guess this will be expanded upon as the series moves along. We do get introductions to the Chosen but it’s not until the end of the book, which felt a bit out of place to me. I’m wondering if Seeley is being a bit ambitious in trying to do this series with every character from the old universe in just six issues. I can see where he’s heading with the various threads and hope that it all comes together cohesively in the end.

I think things fall apart a bit in the art department. Chaos books of old pretty much survived solely on their artistic chops, the story was secondary to the imagery that Hughes, Reis, Balent and others provided. The artwork here is pretty inconsistent all over. The opening pages with Purgatori are great, very reminiscent of the older stuff, but from there the rest of the book feels rushed and a bit too heavy with the shadows and inks. Details all seems to bleed together. I feel like a book that is relying heavily the connection returning readers will have with their favorite characters should have done a better job of rendering them. And we only get about three panels of Mistress Hel, who as the replacement for a major character like Lady Death, should have been showcased a bit more.

As a huge fan of the original Chaos! books, my greatest wish is to see these characters return with love, care, and someone that can draw amazing breasts. So far it looks like we have two of those three things in place, and the third can be worked on. The story feels like there might be too many moving parts for its scope but I’m going to hope that Seeley can impress me with the rest of this series. I’m very curious about Mistress Hel, I hope they give her an original spin instead of cloning Lady Death’s character with a different costume. Overall, if you knew Chaos! back in the day, this will feel like a quick little reunion. I’m just happy to see Evil Ernie killing random folk again.

Score: 4 (out of 7) I wish I could say I started collecting Chaos! comics for the stories, but I have to be honest with you. It was for the velvet variant covers. So soft! And so trippy under a blacklight. Man I miss college.