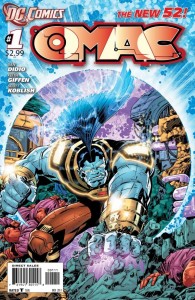 GIANT. BLUE. MOHAWK.Â  If that doesn’t sell you on the comic right away, what the hell’s wrong with you?

The issue is a pretty straight forward heist, if you consider straight forward to involve a giant blue hulking man destroying futuristic labs, as waves of armed men and monsters attempt to stop him.

We’re first introduced to a couple of office workers for Cadmus (the corporate leader in genetic research and cutting edge medical technologies), one of whom is complaining that a man by the name of Kevin Kho (alliteration! yay!) stood her up for lunch.Â  We then see O.M.A.C. in all his blue mohawkian glory smashing the place up.Â  Gee, I wonder who he could be?Â  O.M.A.C. feels very much like the Hulk in that he smashes more than he speaks.Â  Instead we’re privy to the (unknown until the final page) voice in his head directing his actions.

The writing is very straight forward and together with the art feels like a comic out of time.Â  The only thing I’ve previously read by Dan Didio was part of his Metal Men story from Wednesday Comics.Â  Pretty decent I thought.Â  Keith Giffen will frequently plot out comics and have someone else do the dialogue.Â  I don’t know what the writing situation is in this book though.Â  As for the art, Giffen is channeling Kirby to a beautiful level.Â  I wish the credits mentioned the colorist by name, because without them this book wouldn’t be half as pretty as it is.Â  You could seriously frame almost any panel and hang it in your man cave. 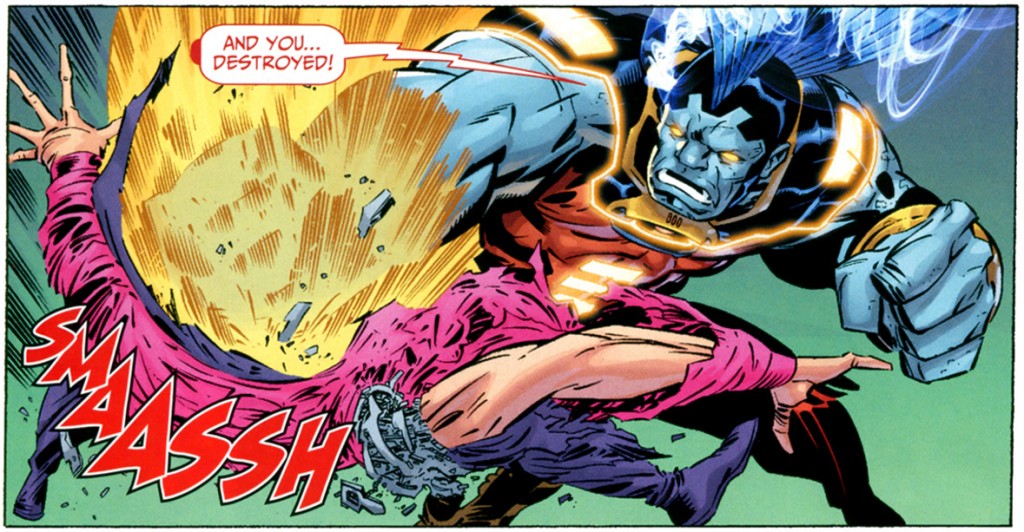 Now, I belive this is the third type of OMAC in the DCU.Â  The first was Buddy Blank (alliteration! whoo!), a corporate nobody working for Cadmus who gets transformed into OMAC (One-Man Army Corps) via a “computer-hormonal operation done by remote control.”Â  The second were a bunch of normal folk who got transformed into OMACs (Observational Metahuman Activity Construct and later Omni Mind And Community) from some sort of virus.Â  This O.M.A.C. (no word yet on what it stands for, but I must say, is the coolest looking of the bunch) seems to follow in Buddy Blank’s footsteps.Â  And if you know about either version, you know who transformed him, and you know what it’s capable of.Â  Dun Dun Dun.Â  But then again it tells Kevin to call his girlfriend after his mission is over so….well that’s different.

Survival Rating: Â  Life Support.Â  Right now it’s following the format of starting you off with tons of action and little story, while the second issue looks to explain how Kevin ended up in his predicament.Â  I’ll definitely be picking up the next one.Â  This issue ends with NEXT ISSUE: THINGS GET REALLY WEIRD!Â  How could I not get it?Â  That said, even the original OMAC series lasted only eight issues.Â  I foresee this ending up being a pretty sweet miniseries, but would be pleasantly surprised if it went longer.

Recommendation: Buy.Â  It’s a solid issue of old school fun.Â  If you like Kirby even a little bit, there’s a lot of eye-candy here for you.