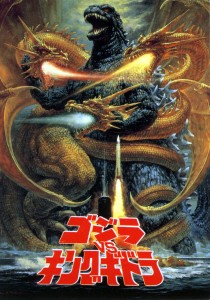 If you thought Godzilla vs. Biollante was crazy, you’ll be floored by Godzilla vs. King Ghidorah – the 1991 film that reintroduces Godzilla to the golden three-headed dragon, King Ghidorah. As a reimagining of Godzilla’s first encounter with his arch-nemesis, you would expect a relatively simple story, since it’s not like the writers had to explain how a monster defeated several times was able to return. On the contrary, the film’s story is completely bonkers, and goes out of its way to overcomplicate each and every plot element.

The plot focuses on a reporter named Terisawa, who becomes wrapped up in a group of time travelers’ plot to go back in time and prevent the last remaining Godzillasaurus dinosaur from being exposed to nuclear radiation and becoming Godzilla. The time travelers, who call themselves “Futurians,” secretly plan to replace the dinosaur with King Ghidorah, a monster who will follow only their commands. The Futurians’ ultimate goal is to use King Ghidorah to take over Japan and prevent it from becoming the dominant global power in the future. Japan’s only hope is for a new Godzilla to emerge and save them from King Ghidorah. 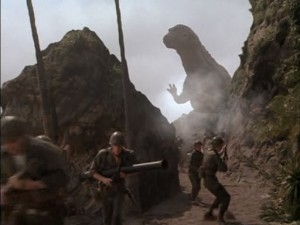 As you could probably tell from that brief synopsis, the story is, to put it mildly, absurd. Not only that, but it handles its use of time travel as a plot mechanic very poorly. Here are some examples of the film’s more egregious plot mishandlings:

Stupid plot point #1: The Futurians’ plan to eliminate Godzilla involves teleporting him to the bottom of the Bering Sea decades into the future before he can become exposed to a nuclear bomb. The plan fails because a nuclear submarine eventually collides with the underwater dinosaur, turning it into an even angrier Godzilla. Why didn’t the Futurians kill the dinosaur instead of teleporting it? It was already wounded when they encountered it in the past, so they could have easily finished the job and been done with it. Oh, but that would contradict the film’s heavy-handed sermonizing of how Godzilla is an inevitability that the world will just have to deal with, I guess.

Stupid plot point #2: The (mostly Caucasian) Futurians hope to cripple Japan’s economic growth by replacing a monster that attacks Japan with… another monster that attacks Japan. Â The more corrupt Futurians want to completely wipe Japan off the face of the planet, so why not let Godzilla in on the fun? And why include a crew member of Japanese origin and a Japanese reporter in your anti-Japanese mission? It’s utterly mind-boggling.

Stupid plot point #3: After relying upon Godzilla to defeat King Ghidorah, Terisawa is horrified to find out that Godzilla (surprise!) remains hell-bent on destroying Japan after annihilating his nemesis. To counter this new (old) threat, Terisawa convinces the sympathetic Japanese Futurian to travel to the future and revive King Ghidorah as a cyborg. This new and improved “million-dollar” King Ghidorah is then brought back in time to defeat Godzilla. I’m all for a bad-ass version of King Ghidorah with a robotic head and wings, but this back-and-forth plot element is mind-numbingly bad.

As if poor handling of plot mechanics isn’t enough of a problem, there is also a blatantly anti-American undercurrent running through the film. Early on, there are flashback sequences of the Godzillasaurus defending a platoon of Japanese soldiers in World War II from a menacing American Navy. These scenes alone would not necessarily indicate anti-American sentiment, but combined with the implication that the Futurian villains represent Westerners fearful of a successful Japan, it all feels a little gross. The film does attempt to balance the social commentary at times, but it is difficult to shake the feeling that an agenda is being pushed. 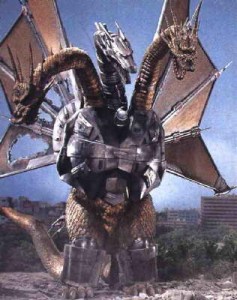 Are these myriad issues enough to ruin Godzilla and King Ghidorah’s reunion? The short answer is no. Despite its ludicrous storyline, Godzilla vs. King Ghidorah is a generally enjoyable film, though not at all on the same level of quality as Godzilla vs. Biollante. Most of the scenes involving the Futurians are entertaining in their ridiculousness — especially those involving the android character named M11. With his dopey grin and awkward mannerisms, M11 is exactly what you would expect a Japanese take on The Terminator to be, and his scenes do not disappoint.

This film could have been something really special, but I guess a “good-bad” Godzilla film is sufficient. It takes a while to get to the titular battle, but it’s worth the wait if only to see Godzilla’s deadliest foe in his most impressive form as Mecha-King Ghidorah. Besides the climactic fight sequence, the film’s best quality is its score, composed (fully this time) by series veteran Akira Ifukube. While the rest of the film is of inconsistent quality, the interactions between the human characters are campy enough to laugh at, and it’s difficult to be too offended by the anti-American undertones in light of the embarrassingly bad plot contrivances.

Fun Fact: The film’s own rule of time travel (one cannot exist twice in the same time) is contradicted when Mecha-King Ghidorah is sent back in time to when his own nearly-dead body is lying on the bottom of the seaÂ