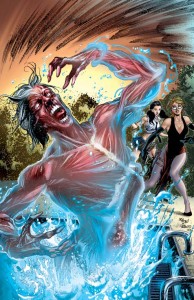 I can give you the same song and dance, I’ve given for the first two issues of this series, it was a new beginning, one of the titles I was most excited for coming into the new 52, a fun and interesting premise. That may all be true, but honestly potential can only take you so far. And now that we are three issues in, I’m ready to say that Resurrection Man is one of my personal favorite series of the New 52. And it lived up to everything I thought it would be before the first issue.

I’ll get this out of the way now, I am completely going to recommend you checking this book out at the end of the review, but why? Well first off, the premise of the main character, a dude who doesn’t exactly die but when he is killed is resurrected with a new special power.

I remember thinking during the first issue, how do you keep that interesting. You can’t keep killing him then its a cheap plot device, nor can you kill him to give him just the right power at the right time. The answer as I found out in this issue is you do whatever the hell you want. Mitchell (the Resurrection Man) starts off this issue dead (he was killed at the end of issue 2) and he is resurrected twice during this story, and they make for some interesting set pieces. There’s no long explanation of his new powers and they aren’t the powers he need at the moment, but he finds a way to make them work. And its one of the reasons, I stood behind this franchise is it has a built in mechanism to remain fun and fresh as long as you are creative.

But a man’s power can only carry the book so far, and much like Grifter, this book seems to deal with the concept of heaven and hell, and the imbalance in both when a soul isn’t collected. And since Mitchell keeps on dying but returning, hisÂ existenceÂ obviously throws a wrench in either side’s plan. And just to throw the readers for a turn, the forces that are currently after Mitchell plan for the heavenly side, though you wouldn’t know it from their tactics.

In addition to their being a heaven and a hell, there is of course that middle existence, which according to the book isn’t named so it is neither purgatory or limbo. And this is where we find our star at the beginning of the issue, so it seems like he is valuable to any and all players involved in this much larger scheme.

Holding this entire, wonderful package together is the art by Fernando Dagnino. And really, the colorist Santi Arcas. The book makes some interesting uses of its color scheme and lighting, which is really highlighted in the “not Limbo” portion of the book. And when Mitchell does return to the realm of the living, we get some really awesome panels as he fights for his life.

Finally, like any good comic, the book ends with a cliffhanger, that is both curious and strange, but makes me want to read part 4 all the more.

New Reader Accessibility: 3– We’re hitting the point, where a lot of this comics are starting to get into their groove, which also means they are building off events and characters introduced already. There’s nothing in this book that is TOO confusing for new readers, but it does help a lot if you’ve been following the series.

Recommendation: Buy It– I already told you at the start of the review, its a truly fantastic read and looks awesome. Support it so it sticks around. Do it for me!