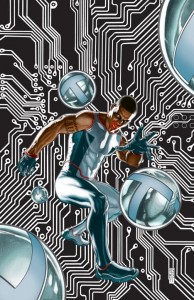 So, I wasn’t exactly sure what to expect out of this title. I’m going to be honest and say I got it because Mr. Terrific is Black and he has a solo title. Say what you want, but how many times have we heard from Marvel and DC that buying titles is how they stay on the shelves? Exactly.

We begin the issue with an adventure over the sky of London which is quickly resolved. Mr. Terrific himself then takes us on a trip to his past to show us just why he wants to fight crime. Elsewhere, someone I expect to be our first villain gets super brain IQ enhancing powers. Also *SPOILER ALERT* elsewhere, the apparent Mr. Terrific starts to kill a politician. What?

I’m trying to hold my enthusiasm at by and give you a measured and relatively objective review. So I’ll start by saying: I’m not a fan of the art. However, it works. It’s kinda rough and Gugliotta’s faces are weird, but it somehow works with the story.

Well, there are my complaints. First, an idea I’ve addressed in my other two reviews: How awesome is it that we have a Black man with a solo title in DC? And he’s the 3rd smartest man in the world? You may wonder how Mr. Terrific feels about that, but he’d rather you just thank him for being the Black guy to save London ‘from a homicidal lunatic wearing weaponized body armor.’ To have a Black man whose superhero identity is grounded in science and technology is a major step forward. Also, the fact that Mr. Terrific is an atheist is a major step because it takes us away from the idea that all Black people are religious. Essentially, social issues galore in this comic.

I especially love the scene between Karen (whose last name I am desperately hoping is Starr) and Aleeka (not sure about the name, but I have since parted ways with my condemnation of ‘ethnic’ names… for the most part). Karen makes sure to mention to Aleeka that she and Michael (Mr. Terrific) are only friends, and when Aleeka responds that that isn’t the issue, Karen posits Aleeka’s reaction is due to Karen being White. Let’s pause and consider that these are real issues and some Black women do have problems with White women dating Black men. Also, Wallace just had a brief beef between a Black and White woman involving race issues. Can I get an AMEN?! (You’re going to have to forgive me for that; I know I just perpetuated a stereotype, but I am an atheist and I love reappropriating Judeo-Christian idioms for comedic purposes).

Now, onto the story, which I’m sure is what you actually waited for. I like getting the backstory early in this issue. It felt organic. I also like how we have a set up of important characters in Michael’s life. Wallace very clearly sets up this issue to provoke questions, especially considering the last page, and to provide us with a sense of Michael’s world when he’s not Mr. Terrific. The story progressed very nicely, and I feel like we are in for some good treats. So…

Live or Die — LIVE! An emphatic LIVE! I greatly enjoyed reading this issue. There was no gray area. I came in unsure and left with one of the comic loves of my life.

Recommendation — Buy It! I love the interjection of social issues involving race, so that is a huge draw for me. Other than that, the storytelling is solid and we are in for some GREAT adventures with Mr. Terrific.