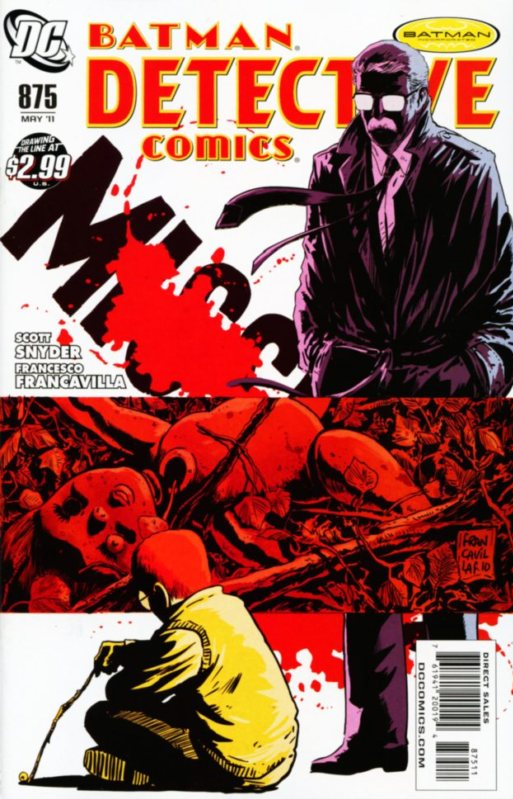 Â Â  I’ve said it before, and I’ll say it again: Detective Comics is my favourite book being published by DC at the moment. Ever since Scott Snyder took over a few months back with Francesco Francavilla and Jock, I’ve been captivated by the book.

Â Â  On top of Detective being my favourite DC book, Scott Snyder is definitely my favourite writer at DC. I’ve really got to compliment him on the plot of the issue. The story follows James Gordon as he tries to close and old case, as well as relieving old memories of his son and the troubles he had with him. And, I was genuinely surprised by a turn it took near the end. I really can’t say anything about it though, because then you might see it coming. Anyway, on top of telling a fantastic story, he does a creepy atmosphere very well, especially when James Gordon, Jr. is around.

Â Â  Francesco Francavilla is not only a great artist, but his style works perfectly with Snyder’s writing style. He makes the present-day stuff look fantastic, as well as being pretty creepy. As good as that work is though; he really shines in the flashback pages. His art really in those parts really feels like David Mazzuchelli’s, and that is a huge compliment. So, in the hands of any other writer and artist, this book wouldn’t be nearly as good. These two are the dynamic duo of storytelling, as far as I’m concerned.

New Reader Accessibility Rating: 9 This is for all intents and purposes, a one-and-done issue, so it’s a very good place to jump into. It does reference a few things from the previous issues, but you shouldn’t be lost here. However, if you haven’t read Detective Comics #871-874, I highly recommend going back and checking them out. They are (in my opinion) some of the best Batman issues ever done.