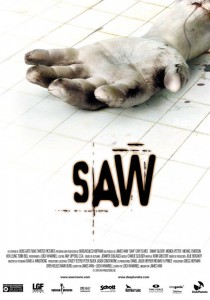 The movie opens fantastically, with a man named Adam (Leigh Wannell) waking up in a bathtub to discover that he is imprisoned in a large, dilapidated bathroom. Adam is chained by the ankle to a sturdy pipe, unable to move more than a few feet. On the opposite side of the room, a man named Larry (Cary Elwes) is chained to the wall, similarly unaware of how he got there. In the center of the room is the corpse of a man who died of apparent suicide, holding a cassette player with instructions on how the two trapped men can escape the room. Of course, being a horror film, we know the solution won’t be as simple as a game of rock-paper-scissors. In order for one man to escape, the other must die. 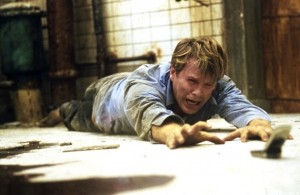 The intriguing gimmick in Saw, and in all its sequels, is that the villain, a sadistic mastermind who goes by the name Jigsaw, abducts people he deems morally corrupt and forces them to play twisted “games” in order to survive. These games sometimes involve another person, but always require sacrifice – mostly of the flesh-and-blood variety. It’s a little disappointing that many of Jigsaw’s challenges (which are often symbolic of his targets’ hubristic lifestyles) seem utterly impossible for the unwilling participant to accomplish without dying, but it is nevertheless fun to see the elaborate ordeals carried out to their grotesque resolutions.

Jigsaw appears sometimes as an animatronic puppet, but mostly as a disembodied, heavily modulated voice who takes great pleasure in taunting his victims with pre-recorded messages. Regardless of his visage, he never directly murders his target. As one of the characters states early on, Jigsaw takes great pride in “finding ways for his victims to kill themselves.” Saw wisely chooses to focus more on the lives of the imprisoned men rather than shed light on the character of Jigsaw. The narrative takes many twists and turns, with frequent flashback sequences fleshing out the characters and their motivations. 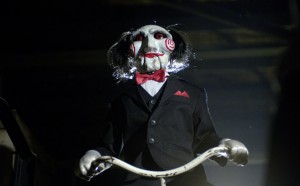 While Saw is a generally enjoyable horror tale, it has a fair amount of frustrating scenes. The mystery surrounding the Jigsaw character leads to far too many red herrings, and the scenes in which the villain interacts with Larry’s kidnapped wife and daughter are unnecessarily manipulative, with the scene in which Larry’s threatened daughter screams “Why?!” over and over for what seems like an eternity feeling especially offensive. And why would Jigsaw, a self-professed judge of moral character, condone the emotional torment of Larry’s innocent family in the first place? And let’s not even get started on the overacting near the end of the film, where Cary Elwes and his badly fluctuating American accent nearly turn the film into a full-blown comedy.

Overall, though, Saw remains a fun, well-paced ride, and I was genuinely surprised by how much I still enjoyed watching it over a decade since my last viewing. The film thrives on its exceedingly dark and dingy visuals, which work well with Jigsaw’s cruel world and the demented souls who inhabit it. Sure, the storytelling is clumsy at times and the ultra-mega–hyper-editing can grate on your nerves after the first couple of jarring quick-cuts (of which there are roughly 10,000 throughout the film), but Saw ultimately delivers a tense, atmospheric thriller and deserves its status as one of the more influential horror films of the 2000’s.

Best Death: A man is forced to crawl through a maze of tightly-wound razor wire in an attempt to free himself within a time limit. Unfortunately, he bleeds to death before reaching his goal.

Genuinely Scary Moment: While being stalked in a pitch-black apartment, Adam uses a camera’s flash bulb to try to spot his assailant. When the last flash goes off, you see the villain, wearing an effectively grotesque pig mask, lunging at Adam.

Review 5 (out of 7): There is a lot to admire in the first film of the prolific franchise, and even the disappointing final act doesn’t derail the dementedly fun ride.