This month will be filled with remakes and reboots and even more remakes!

Thus far, I’ve consumed more than half a dozen remakes, and wanted to share some brief thoughts on them. Not sure if will do for every movie, but here are a handful!

Maniac – A happy coincidence, I actually watched this film not knowing it was a remake and was later corrected by someone. This film has the novel concept of being filmed in the first person going for it. Aside from that, there’s not much else to the movie.

See it for the novelty, expect nothing else from it. 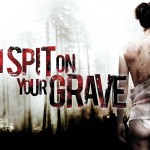 I Spit on Your Grave – The original has the reputation for being rather graphic, and I’ve heard such mixed things on the remake wasn’t sure what to expect.

The best word that comes to mind is… uncomfortable.

It’s uncomfortable watching the prolonged torture and rape of the main character. And then it gets even worse as she exacts her revenge on her tormentors.

It’s a recommend movie, but not sure I can ever watch it again.

House of Wax – This is a redux, and you can read our original review here.

Funny Games – One of those shot-for-shot remakes of a foreign film (at least, it’s from the same director) that attempts to subvert the tropes of the home invasion sub-genre.

I enjoyed the movie up until the final 10-15 minutes or so initially and hated the ending, but after talking to some folks online, I changed my mind (Yes, this does happen.. rarely, but it happens!). And the exact reason I got upset at the movie’s ending is the intent of the director’s vision.

Fright Night – Just a fun and entertaining movie. Though, it is weird to see so many familiar faces whose careers haven’t really seem to go any place recently.

The Hills Have Eyes – Damn fine movie. Some unique villagers design. A cast of characters who aren’t unlikable (which is becoming a rarity in horror films these days.) A sort of open-space, but confounded area setting, which made for some interesting twists and turns.

A bloody time without being overly gorey or gross.

What horror films have you checked out so far this month? Let us know in the comments below!