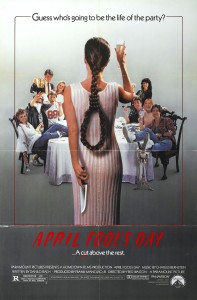 April Fools Day (1986) is not what you would expect from an ‘80s “slasher” flick. With names like Frank Mancuso, Jr (producer of the Friday the 13th sequels) attached, one would expect April Fools Day to be average, run-of-the-mill  horror cinema, when it’s actually closer to a parody of the movies that were popularized by its producers.

The movie begins with a group of college-aged friends gathering on a pier, preparing to travel to the island mansion of their friend Muffy St. John (one of the best character names of all-time) to party during Spring Break. The group of friends are exactly what you would expect them to be: obnoxious, mean-spirited, and hormone-driven. But hey – one of the idiots is played by Thomas F. Wilson, better known as Biff Tannen from Back to the Future, and we all know how good a job he does playing a creep in that movie.

After boarding a boat and setting sail, the friends mercilessly harass one another until a horrific accident mutilates one of the boat’s crew members, setting the tone for the group’s ill-fated vacation. Upon arriving at the island mansion, the group is surprised by their host and longtime friend Muffy’s unusual behavior. Muffy seems to be more interested in playing pranks on her friends than in joining them in their sophomoric interactions, and she is mysteriously absent most of the time. As the characters find ways to whittle away their free time, they begin to vanish one by one, with their friends eventually discovering their murdered bodies.

For a slasher flick, April Fools Day is surprisingly tame. There’s a light amount of sex and nudity, and most of the  (unimpressive) gore is reserved for the discovery of the dead bodies of Muffy’s friends, who are never actually seen being murdered. So what exactly sets this movie apart from its peers? To be perfectly honest, not very much, until a final twist changes everything. As is the case with any movie that relies too heavily on a single twist (The Game, or pretty much anything written by M. Night Shyamalan…), your willingness to suspend disbelief will heavily affect your opinion of this movie. The big twist is audacious – a gutsy reveal that changes everything preceding it – and… well, it left me feeling somewhat cheated 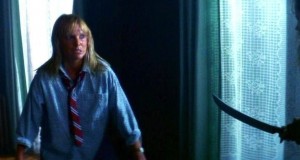 I applaud April Fools Day’s attempt to separate itself from the pack and try something different, and it earns praise for being relatively self-aware a full decade before Wes Craven’s Scream turned the genre on its ear. Unfortunately, it’s difficult for me to say that I really like the movie overall after its preposterous twist reshapes almost everything that happens before it. Sleepaway Camp (a horror film with an unforgettable twist) this most definitely is not, but it might be worth checking out if you can admire some seriously flawed ambition.

Review: 3 (out of 7) – April Fools Day is a moderately enjoyable and darkly humorous slasher flick that is up-ended by a twist that comes out of left field. Your mileage may vary.