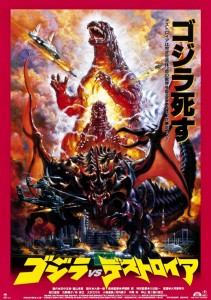 With the state of Japanese theatrical cinema in flux throughout the 1970’s, the beloved Godzilla of the “Showa” era (1954-1975) was never able to receive the send-off he deserved. In an effort to keep history from repeating itself, Toho wisely jumped at the opportunity to grant the Heisei series (1984-1995) some real finality when it began to wind down. The marketing campaign for 1995’s Godzilla vs. Destoroyah focused on two shocking words: “Godzilla dies.” That’s right – every teaser trailer and commercial leading up to the film’s release unabashedly revealed its ending. Fortunately, the film is much more than a gimmicky attempt to gain attention by killing an icon of the silver screen, and is actually a damn fine Godzilla film in nearly every regard.

An early scene shows Godzilla stomping through a city, literally steaming with fury, the destruction accompanied by composer Akira Ifukube’s most intense rendition of the iconic monster’s theme. It takes only a moment to realize that something is very wrong with Godzilla. Aside from the aforementioned steam, his body is covered in glowing orange patches that make him look something like a walking volcano. Being the living, breathing nuclear reactor that he is, Godzilla is prone to similar complications, and he is on the verge of a nuclear meltdown powerful enough to destroy the planet.

The film pays plenty of homage to 1954’s Gojira throughout, cleverly tying the antagonist monster, Destoroyah, to the “oxygen destroyer” weapon used to kill Godzilla in the seminal film. Furthering the connection, several of the central human protagonists are loosely related to Gojira’s Dr. Serizawa, the man who invented the oxygen destroyer. Just as the atomic bomb gave birth to Godzilla, the use of the oxygen destroyer sparked the radical mutation of a Precambrian organism, creating dozens of human-sized crustaceous monsters that, upon maturity in the present day, begin to attack Tokyo. 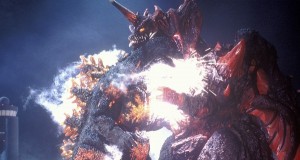 While the references to Gojira are poignant and restrained, the film slips a bit early on by paying desperate homage to a very different sci-fi classic: 1986’s Aliens. A severely misguided sequence focusing on the Japan Self Defense Force’s (JSDF) encounter with a group of Destoroyahs in an abandoned building plays out almost identically to a sequence from James Cameron’s influential masterpiece, but the level of filmmaking on display here is sadly not on par. The effects are relatively shoddy, and the action – mostly consisting of ineffective flamethrowers and guns being fired – is as boring as it is repetitive. It’s a shame that this sequence was included at all, because it really is one of the few missteps in an otherwise excellent film.

The film quickly regains its legs when, after their scuffle with the JSDF, the Destoroyahs combine to form a single building-sized monster that immediately begins to wreak havoc. Destoroyah’s rampage is interrupted by Little Godzilla (now referred to as Godzilla Junior), who has grown exponentially since the last film and is now roughly half the size of his adopted father. Junior is seriously wounded by Destoroyah, but stalls his adversary long enough for Godzilla proper to show up. After a short brawl, Destoroyah takes off the kiddie gloves and transforms once again into a demon-like form that is even larger than Godzilla. Destoroyah takes advantage of his newfound strength and finishes off Junior, enraging Godzilla.

The rest of the film is a vicious one-on-one battle between Godzilla and Destoroyah, with Godzilla having a very limited amount of time to destroy his foe before melting down. Godzilla’s final battle is one for the ages, with the best effects in the series yet and plenty of brutal combat. Fearing Godzilla’s imminent meltdown, the JSDF prepares to use their newly-built Super X-3 ship to freeze Godzilla just as his demise begins, which would save the planet, but not Godzilla himself. After using every ounce of his remaining energy to defeat his rival, Godzilla’s meltdown occurs, and we’re treated to an emotionally charged sequence. The Super X-3’s weapons are able to successfully contain much of the effect of Godzilla’s meltdown on the environment, but the King of the Monsters is no more. 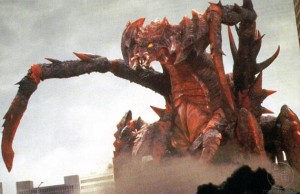 Aside from the inherent campiness found in the portrayal of men in monster suits fighting each other, Godzilla vs. Destoroyah is a serious, often bleak film that is sure to elicit an emotional response from even the most jaded of Godzilla fans. Surprisingly, it follows through with most of its grim ambitions, with a startling conclusion that will stay with you for a good long while. The final shot of the film provides a minor reprieve, showing a fully mature Godzilla Junior roaring amongst the ruined city of Tokyo, apparently revived by the immense energy expelled by Godzilla as he died.

All in all, this is easily one of the best and most riveting Godzilla films. In most cases, I feel that a grim premise detracts from the enjoyment of a Godzilla film, but it is handled quite well here. Although its effect is somewhat negated by a strange contrivance at the end of the film, Godzilla Junior’s death midway through is quite shocking, and gives us a real reason to cheer for Godzilla in his battle against Destoroyah. And it goes without saying that Godzilla’s own death is profoundly impactful, with even the human characters in the film showing remorse. The Heisei era got the finale it deserved, and despite the implication that Godzilla Junior could take over as the protagonist of the next film, the series would take a hiatus to allow Hollywood a shot at its own Godzilla film.

Fun Fact: This is composer Akira Ifukube’s final score for a Godzilla film