For a film as smart as it is, you can sum up the plot of The Martian in one sentence: What would it take to survive alone on a desolate planet for an extremely long period of time and what it would take to rescue someone in that situation. 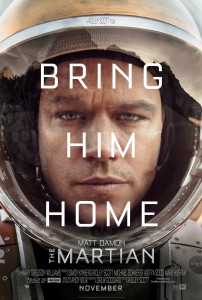 There’s arguably two parts to this story; you can choose to look at the human story of the survivor trapped on the planet and the toll his stay on the planet takes on his mind and his body, how his stay may (understandably) change him into a different person. You can look at the people that left him behind, how they may feel like they’ve abandoned him and the cost they might pay/the sacrifices they might make to get him back alive. The Martian is, for the most part, almost entirely uninterested in this part of the story.

Don’t get me wrong there’s a few scattered moments where you can see the effect of what Matt Damon is going through getting to him both physically and emotionally which are wonderful little breaks from all the science. These brief moments aside though Mark (Damon) handles being trapped horribly alone on a deserted planet for an extremely long period of time surprisingly well with nary a “Wilson the volleyball” in sight. A friend tells me that the book establishes that the astronauts on the mission are trained to “survive isolation for long periods of time” but I definitely did not see the film do the same. The result is a film that while entertaining can’t help but feel incomplete, like it’s missing something more that should be there.

The other part of the story is the literal part – What will it literally take to survive alone on a desolate planet and what will literally have to be done to rescue him, this is the part of the story of The Martian that the filmmakers are significantly more interested in telling. Thankfully for all of us watching, they do it very well.

Wasting no time getting the plot set up, we have Mark stranded on Mars and using his science skills (‘I’m a botanist!’) to survive the red planet for as long as he can and find a way to contact NASA, who, back home, are trying to work out the best way to get him back. The film doesn’t so much pay lip service to the science as revel in it for almost it’s entire running time, taking great pride in presenting our cast with a new problem for them to out-science whether it’s growing plants, sending supplies to Mars or just simple communications. For all the characters that say certain challenges will be “very difficult” or “near impossible” they don’t seem to ever let it get to them or encounter many obstacles and even the mild possible political turmoil seems to go away without too much effort.

If I seem like I’m being too negative, up to now the film does have a few saving graces, notably the script by Cabin In The Woods writer Drew Goddard. The script is just the right level of smart where it both seems impressive and easy to grasp but it doesn’t seem so self-indulgent that it’s “having sex with itself” to use the film’s own terminology. It’s got a good sense of pacing, never letting one scene (or one problem) drag before promptly moving onto the next one holding  audience’s attention. Remarkably considering the subject material it turns out to be surprisingly charming, whether it’s everyone’s complete tenacity in the face of seemingly impossible odds or a running joke involving Mark’s soundtrack when he’s stuck on Mars the film remains surprisingly upbeat despite its potentially downbeat subject matter. These two attributes together make the almost 2 and a half hour running time seem significantly shorter than it actually is which is always a good thing.

The all-star cast including (but not limited to) Chiwetel Ejiofor, Jessica Chastain, Jeff Daniels, Kristen Wiig and Sean Bean could be entertaining reading the phone book (to borrow a cliché) so it’s no surprise that even though the film doesn’t demand a lot of them throughout they’re still a pleasure to watch on screen throughout. As good as they are though it’s obviously Damon that gets MVP award. While I’ve complained that the film may lack a proper emotional arc he absolutely nails the smaller moments and little touches throughout the films running time. 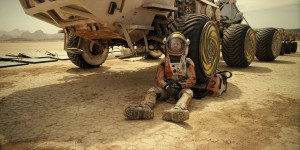 Finally even in his weaker films Ridley Scott has always had an eye for good visuals and to absolutely no surprise he delivers here too. Since I swore off 3D films some time ago (Although I’ll admit Scotts Prometheus was one of the few films that made good use of it) I seen it in 2D and there are some predictably lovely shots of the red planet and space throughout the film.

Which I think is everything I wanted to address in this review, despite my initial negativity I really did enjoy my time with the film. While part of me would have like to have seen more of an emotional arc I’m happy that they did a good job making the film that they wanted to make instead of forcing in an emotional arc that they didn’t want to do that doesn’t add anything to the film. Given the last Matt Damon in space film (Last years Interstellar, also starring The Martians Jessica Chastain) had an emotional payoff that had me groaning and wishing the film would end as soon as possible I should probably just count my blessings.

So to (finally) sum up; your enjoyment with The Martian has a snappy script, lovely visuals, a fine cast of actors who make the most out of material that doesn’t ask that much of them and a lead who really sells the little moments. That said at it’s core the film is mostly all about the science and how much you get from the film will probably depend on how engrossing you find it.