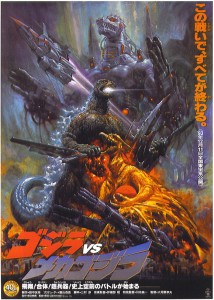 Given the commercial success of Godzilla vs. King Ghidorah and Godzilla vs. Mothra, it’s no surprise that Toho decided to continue its kaiju reunion tour in 1993 with Godzilla vs. MechaGodzilla II — a real headscratcher of a title given that it is the first meeting between Godzilla and his metal doppelganger in the Heisei series, and third overall.

Do you remember in Godzilla vs. King Ghidorah how (prepare for no sense to be made) in order to stop a more powerful version of Godzilla that was created when the “Futurians” traveled in time from the distant future to the 1940s and transported a Godzillasaurus dinosaur to the 1990’s, the Futurians then had to travel back to the future in order to turn King Ghidorah into Mecha-King Ghidorah, who was then sent back to the 1990’s? If you haven’t seen that masterpiece of cinema, don’t worry — the reference won’t make much sense either way. Regardless, in a nod to Terminator 2, the Japanese government reverse-engineers the remains of Mecha-King Ghidorah to create MechaGodzilla — a machine to be piloted by a group of highly trained soldiers known as G-Force, whose only goal is to destroy Godzilla.

The main focus of the plot is on G-Force and MechaGodzilla’s clashes with the flesh-and-blood Godzilla, but a key subplot deals with the discovery of a giant egg that hatches into a baby Godzillasaurus dinosaur. This “Baby Godzilla” is friendly to the human scientists who take care of him, but they know deep down that he, like his radioactive father (uncle? cousin?), represents a world in which humans are destined to be dominated by powerful monsters. 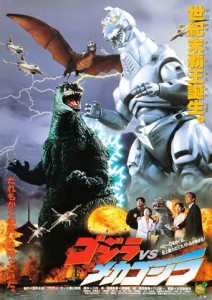 The idea of MechaGodzilla being a heroic creation of the Japanese is an inspired one, and the robotic beast being piloted by a team of coordinated soldiers calls to mind the Super Sentai (Power Rangers) television shows that were popular in the 80’s and 90’s. MechaGodzilla is one of the few reimagined monsters of the Heisei era that doesn’t look noticeably different from its Showa-era design, but it does get a nifty jetpack/laser cannon “Super MechaGodzilla” add-on that makes this version of the metallic monster the most formidable yet. I’d be lying if I said I didn’t miss MechaGodzilla’s finger/knee/toe rockets from the Showa era, though.

Rodan — the other Toho kaiju from the 1950’s — makes his first appearance since the 1960’s in both his standard “Pteranodon” form and a powered-up “Fire” form that is triggered by a tune sung by psychic schoolgirls (…). Believing Baby Godzilla to be his sibling, Rodan repeatedly attacks both Godzilla and Japan in an effort to retrieve his kin. While it’s fun to see one of the earliest kaiju reimagined for more modern audiences, I’m not entirely sure why a second form is necessary.

The action scenes are visually dazzling, but the battles between Godzilla and MechaGodzilla are often reduced to the two simply trading projectile attacks. Even when Godzilla is powered-up (sensing a theme here?) by the energy emitted by Fire Rodan near the end of the film, he does little more than repeatedly blast Super MechaGodzilla with his atomic breath. At least the scenes involving Rodan are a little livelier: it’s great to watch a long line of buildings fall apart as the beast soars over them at supersonic speeds. 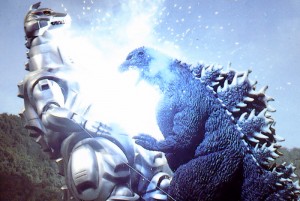 The music, once again composed Akira Ikufube, is predictably great, and his new MechaGodzilla theme, accentuated with drums seemingly in a tribute to the Terminator theme, fits the film perfectly. The story is decent, but once again suffers from being too complex. On the positive side, the inclusion of the Baby Godzilla subplot leads to a surprising number of emotional scenes, as well as the characters’ questioning of humanity’s ultimate role on the planet.

All in all, Godzilla vs. MechaGodzilla II is a solid, if not exceptional Godzilla film. My biggest complaint is that it is difficult to root for Godzilla given G-Force’s noble intentions, yet the film continuously portrays Godzilla as sympathetic as soon as he starts taking a beating. This might indicate more depth than I am acknowledging, but it goes against the general tone of the film. As it stands, this film falls squarely in the middle of the five films in the series that feature MechaGodzilla, but that still makes it an above-average Godzilla film overall.

Fun Fact: The actresses who portrayed the twin Cosmos in Godzilla vs. Mothra make a cameo appearance as a pair of teachers

Memorable Moment: Godzilla using the shock cables that pierced through his skin to send a wave of nuclear energy back at MechaGodzilla, frying the robotic clone