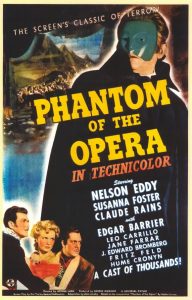 After a solid run, the Universal monster series of movies suffered its first notable dud with the 1943 remake of 1925’s The Phantom of the Opera. In case you forgot, I considered the 1925 film to be an early horror classic that has held up surprisingly well when I revisited it. While the 1943 remake differs in many ways from its predecessor, nearly all of the changes negatively impact the film.

After years of innovating Gothic cinematic horror, Universal opted to pander to the masses with its “Phantom” remake, indulging in many popular film cliches of the time. In its attempt to be everything to everyone, this version of Phantom of the Opera struggles to find a consistent identity. It veers between sappy melodrama and suspense thriller, and even occasionally dips its toes into “screwball” comedy to bizarre effect. The best (backhanded) compliment I can pay the film is that it feels like an entirely different experience from the 1925 classic. 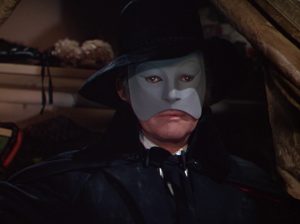 The film’s first act focuses on professional violinist Erique Claudin (played by horror veteran Claude Rains), who is hopelessly in love with a struggling opera singer named Christine. Erique has been secretly paying for Christine’s singing lessons, but is unable to continue funding the lessons after he is dismissed from the orchestra due to nerve damage in his hands. Desperate to continue providing for Christine (who is also romantically pursued by the bumbling duo of singer Anatole and investigator Raoul), Erique attempts to sell his prized, never-before-heard concerto to a crooked music publisher. After discovering the publisher’s plan to sell the concerto without crediting its composer, Erique flies into a violent rage and attacks the publisher, only to have a pan of acid thrown into his face, forcing the newly-disfigured Erique to flee into the night.

Some time later, a masked Erique (now referred to as “The Phantom”) who now lurks within the bowels of the opera house, drugs a rival singer of Christine’s and anonymously threatens anyone who stands in the way of her success. As the Phantom’s violence escalates, Christine’s duo of rival suitors hatch a plan to lure the Phantom into the open during an elaborate opera performance. Raoul and Anatole’s plan comes crashing down (along with a chandelier… onto the audience), and the Phantom escapes with Christine into the tunnels beneath the opera house. 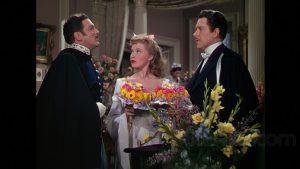 The final scenes of the film most closely resemble the 1925 version and the original book, with Christine being held captive by the Phantom as Raoul and Anatole doggedly search for her. Christine distracts the Phantom long enough to snatch the mask from his face in one of the film’s best moments, but this Phantom’s acid scars are far less frightening than Lon Chaney’s literal skull face. The Phantom is far less sinister and murderous in this version as well, opting to engage his pursuers with a sword rather than lure them into a trap-ridden hideout. Unfortunately for the Phantom, Raoul brought a gun to the sword fight, and his firing of said gun causes the underground tunnel to collapse, crushing and apparently killing the Phantom. The surviving trio, now aware of the Phantom’s true identity and suffering, remark how Erique will live on through his concerto before the film ends on an oddly comedic note, with Christine turning down both of her suitors in favor of her singing career.

Where do I start with this movies problems? While I don’t think the idea of romanticizing the Phantom character is necessarily a bad one (Andrew Lloyd Webber was hugely successful in using a similar idea for his musical adaptation), I think this version falls flat in trying to blend melodrama, horror/suspense, and comedy. The film jumps between drama and comedy so frequently that you simply don’t know how to react when people start getting murdered by the Phantom.

Another complaint is that too much of the film focuses on the Phantom’s backstory, and while Claude Rains tries his hardest as the eponymous antagonist, he is given little to work with, feeling half-assed both as a sympathetic character and as a murderous villain. Too much time is also spent on the love triangle of Christine, Raoul, and Anatole. The two men look like they could be twins, and their childish bickering feels very out of place. The characters’ accents are also all over the place (not an uncommon complaint for this era of cinema), with a lot of American accents that sometimes attempt to sound French or British. 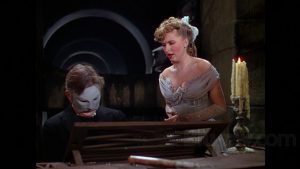 While I don’t care much for this adaptation overall, it’s not entirely without value. The Russian opera that is performed prior to Phantom dropping a chandelier on the audience is an impressive set piece with memorable original music, and it’s a shame that there aren’t more sequences that capitalize on the film’s setting. The film also seems to be influential toward future adaptations, such as Webber’s aforementioned musical and Brian DePalma’s quirky cult classic, Phantom of the Paradise.

If you feel obligated to watch a film adaptation of The Phantom of the Opera, stick with the 1925 film. Sadly, this mostly vapid remake is what Universal chose to include in their otherwise amazing “essential” Blu-Ray collection of classic monster films, likely because it feels more in line production-wise with their films from the 30’s and 40’s. Unless you’re a compulsive consumer of horror films like myself, skip this dud altogether.

Fun Fact: In an earlier version of the screenplay, Erique/The Phantom was Christine’s estranged father, explaining his obligation to assist her financially.
Memorable Moment: The fictitious opera that is performed midway through the film is lavishly produced and features some impressive music.