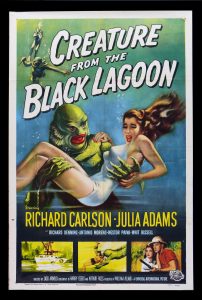 Once again, we skip ahead to a new decade to look at one of the more unique “core” Universal monster movies: 1954’s The Creature from the Black Lagoon. In the mid ‘50s, American moviegoers were all about movies with alien invasions and monsters on the loose, and CftBL is a prime example of the latter, with a bit of a twist to make it feel fresh.

The story involves a group of scientific researchers, who, intrigued by some mysterious fossilized remains of a humanoid creature with characteristics of an aquatic animal, set out to the Amazon to learn more about its origins. The group of researchers consists of David, whom the film is careful to remind you is the manliest ichthyologist this side of the equator, his girlfriend Kay, and Mark, who is a grumpy jerk who can’t keep his romantic feelings for Kay to himself. Mark and David ooze cheesy ‘50s masculinity, so it’s fitting that they could pass for stunt doubles for Frank Sinatra and John Wayne respectively. Toss in a few stereotypically ethnic crewmen who are only there to be fish food for the creature, and you’ve got your ragtag band of adventurers!

It doesn’t take long before a relative of the fossilized creature (often referred to by fans as the “Gill-Man”) encounters a group of human natives working for the researchers. One of the natives attacks the creature in a moment of panic, and it kills them in self-defense before fleeing. Unaware of what exactly killed the natives, the research team moves by boat further into the creature’s domain – the eponymous black lagoon. Tension ramps up as the Gill-Man silently stalks the researchers, with a one of the film’s highlights being the scene where the creature swims below Kay, eerily mirroring her movements as she swims along, completely unaware of its presence. 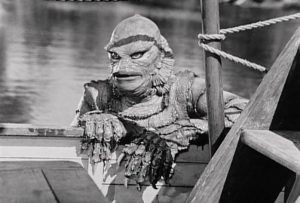 Once the researchers become aware of the Gill-Man, Mark wastes no time pissing it off by firing a harpoon gun at its shoulder, causing it to flee again. The creature proves to be resilient, and effectively mounts a guerilla campaign against the misguided humans, only ceasing its rampage to occasionally ogle (and eventually kidnap) Kay. Mark’s actions, along with his jealousy of David, create a rift between the two men, and David finds himself with a human enemy to deal with before he can rescue Kay from the infatuated merman.

Creature from the Black Lagoon deviates from previous Universal monster movies in several significant ways. First and foremost, the Gill-Man has no human ties whatsoever, representing the evolution of some long-forgotten aquatic species. It’s not the result of a scientific experiment gone wrong or a human who has fallen victim of a supernatural curse; it’s simply a highly evolved marine animal. Another key difference is the film’s moral stance on science. Unlike previous movies like Frankenstein, which portrayed science as a forbidden practice used by humans to play god, CftBL views science as a wholly positive thing that can be used to better understand the world around us. 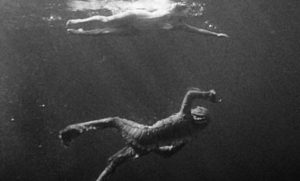 The design of the Gill-Man reflects these departures, and fits in with the rubber-suited monstrosities from other films of the ‘50s. The creature looks a little goofy when he’s lurching about on land with arms outstretched, but the the suit used for the underwater sequences allowed its wearer to be quite agile when swimming, which makes you believe that it is vastly superior to its human opponents when in its own element. There are some nice practical effects added to the suit as well, like the expansion and contraction of the gills. The Gill-Man design is one of the most iconic of any monster movie, and while it won’t cause anyone to lose any sleep, it maintains its appeal.

While it might seem like a simplistic monster movie, CftBL has a surprising amount of heart. The Gill-Man is ultimately no less sympathetic than its cinematic monster forebears, with the violence it causes being mostly out of self-preservation, and its attempts to kidnap Kay stemming from a need for companionship. The Gill-Man evokes the same sort of sympathy as King Kong, as both are misunderstood monsters capable of horrible violence who are intruded upon by mankind. It might have a face only its mother can love, but the creature is certainly far more likable than that jerk Mark, that’s for sure! 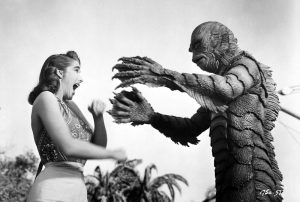 Creature from the Black Lagoon is a well-paced and reasonably exciting adventure-horror film. While it’s lacking the gothic atmosphere of previous Universal monster movies, it makes up for it with a fantastic jungle setting that feels vibrant even in black and white (you can even watch it in 3D!). The Gill-Man is often considered the last great Universal monster, and despite appearing so much later than the others, it fits right alongside them.

Memorable Moment: All of the underwater segments are gorgeous, but watching the Gill-Man gracefully swim beneath Kay is a particularly wondrous cinematic moment.